EP Review, Folk, Ireland, London, Traditional August 23, 2018 1 Comment
What a fortnight for acclaimed Tipp born singer-songwriter James McGrath with both a new must-hear EP out this week and a must-see gig in London soon too! 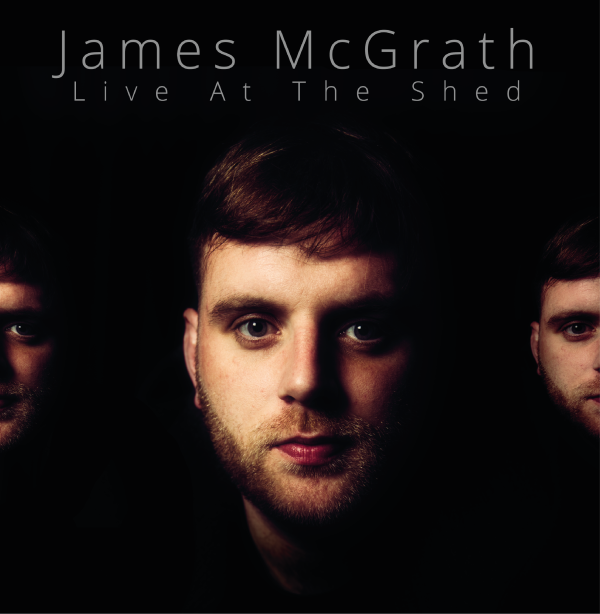 My family come from Tipperary (shout out to Ballylooby and Clogheen Wilkinson’s) so at this time of year I would normally be hurting after our annual defeat to Kilkenny in the All-Ireland Hurling Championship but with not even that to look back on I have had to cast my net a bit wider. Following the well trod route of many many Tipp people he has moved to London and with the release of his latest EP, Live At The Shed is hoping for the breakthrough that will see him reach the heights his talents deserve. 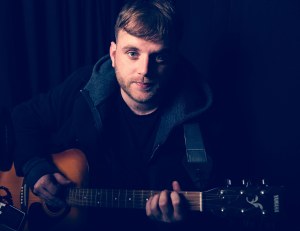 Ireland has no shortage of talented singer-songwriters, and never has had to be honest, and among the most talented the name James McGrath is up at the top of the list. Hailing from Nenagh in the north of Tipp James has a voice that has been compared to both Neil Young and Eddie Vedder and the songwriting skills of the legendary Shane MacGowan. Live At The Shed is his third EP release and showcases James live at Shed Studios in the once heavily Irish enclave of Enfield in north London. Just him and his guitar and no knobs twiddled or fiddled about with to change anything. James exciting and passionate live performance transfers onto this recording so well and his warmth shines through. He has already tasted success at home in Ireland when his track ‘8 Cans’ from The Cans EP hit the #1 spot in last years Irish Download charts.

Live At The Shed begins with ‘Can’t Get Out’ and the first thing you notice is James voice. Clear and precise and with a brogue as Irish as Damo Dempsey but without the over inflated ‘Dubb’ inflection. The shortest song here its a tale of having no cash and trying everything you can to make your life work. There’s only four songs here and ‘Bad Bends’ is up next. It’s much more laid back but far from a ballad again it’s no tale to eat popcorn too and despite it being a downbeat song it’s also full of hope and tender emotion. It’s certainly not what I am use to reviewing on these pages but I like to challenge myself and I got over the idea that I cannot like things that my Mammy would like years ago. Now i am not one to bander Ed Sheeran’s name around much but if you draw a line between the wee ginger billionaire and Shane MacGowan then you’d be right to put James on the Shane side of the middle. Third song is ‘Walk Away’ and not much to add here except its more of the same mid-tempo folk.  Extremely well played and James has stamped onto these songs his own brand. At times you can imagine the songs coming from Christy or Damo but young James has certainly developed his own style. The highlight of the EP for me is ‘Race To The Bottom’ which brings down the curtain after only eleven minutes.

One of James stated goals in moving to London was to write an album so here’s hoping he gets onto it as soon as possible. Things move fast in London so he needs to strike while he’s building up some momentum. One bad habit he seems to have picked up in London like the many before him is a love of the bookies. Did your Ma never tell you there’s no such thing as a poor bookmaker? It’s a downbeat song and its not unusual for any of us who arrive in London to find it too much and a combination of the capital’s excesses and homesickness often is too much for new arrivals. A real beauty of a song. 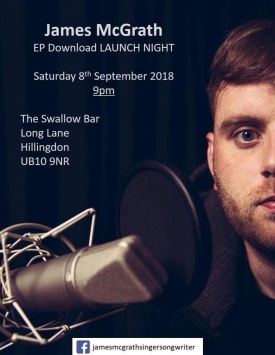 James has released a fine EP and his humour, passion and sincerity shine through and if like me you can’t wait to see him live in concert we will get our chance in just a couple of weeks at the EP’s official launch night at The Swallow Bar in Uxbridge. James favourite venue a packed, fun, lively night is in store and to top it all off it’s free entry as well. He takes the stage at 9pm and you can find the FB event here. The Swallow Bar is a old fashioned Irish bar on Long Lane in Uxbridge, UB10 9NR and is situated right next to Hillingdon Station. It’s on the Picadilly and Metropolitan lines but bring a book if you coming from central London as its a bit of a slog but never let that put you off. Up to a hour on the tube may seem long in London but having just got back my home town I can honestly say it is not! It may  not be the raucous Irish music we are use to here in London Celtic Punks towers but man can’t live by that alone. It’s good for your soul to listen to someone like James occasionally. He has a very exciting future ahead of him and I think the dark streets of London will suit him well.
Buy Live At The Shed
iTunes
Contact James McGrath
Facebook  Instagram  Spotify  YouTube
(James McGrath singing his fantastic hit single ‘8 Cans’. Filmed at Fat Pigeon April 2016)