NEW SINGLE AND VIDEO FROM JOSHUA McCLURG FROM NAYMEDICI

I had wondered after not hearing from them for a bit but sad to say that Manchester-Irish celtic-punk band Naymedici are no more. Now that name probably means more to our Irish readers than anyone else as at the height of their popularity they upsticks and moved across the sea (wrong way surely?!?!) to a lovely beachside cottage near Clonakilty on the coast of West Cork. Described as

“the bastard child of The Pogues and Gogol Bordello”

in one review, and Scots writer Irvine Welsh said they were ‘f***ing on it!’ which is probably one of the best reviews anyone could ever get! They played all over Ireland and Britain and were regular’s on the festival circuit too and even did undertook a tour of Europe, playing in cities such as Berlin and Prague among others. They released a few singles during this time, including ‘Paddy McGee’, ‘Koo Koo The Bird Girl’, ‘Whack Fol The Diddle’ and ‘Men and Women’ and were featured on BBC 6 Music, E4, MTV UK, MTV Europe and MTV International. Not bad for a DIY Band with no management!

Well three years ago the band went on their different ways and Josh the bands singer moved back to Manchester and began his next project The Lucky 15’s, an Irish Party Band, with a great bunch of talented musicians I knew from various other bands in Manchester. It was during this time that Joshua began writing material for a solo album, You Can’t Take It With You, set for release next month.

So here’s a wee taster with the video for ‘If You’re Gone’ the first single release from Joshua McClurg’s debut album, ‘You Can’t Take It With You’.

Now it may not be the raucous celtic-gypsy-Irish folk we were use to with Naymedici but even better there’s an unmistakable Poguesy air to it from the land of ‘Dirty Old Town’. The piano, backing vocals and marvellous lyrics straight remind me of If I Should Fall From Grace With God era Shane. If you like this then you can pre-order Joshua’s album from his Bandcamp page below and keep an eye out for a review coming to these pages soon. 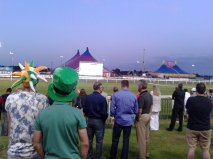 Not a huge fan of horse racing I must admit. Years of having it drummed into me by my mammy that it was (along with drink) the curse of the Irish working classes… and for evidence we only had to look at our Uncle Pat who would be living the highlife if he hadn’t spent so much money in the bookies over the years!!
So we headed off to Kempton Park Irish Night At The Races last week. The day before was scorching so needless to say everyone turned up in barely nothing only for it be bitter cold. Had one bet ‘Divine Right’ £2 to win -last of the big spenders!- came in 5th so we buggered off out the cold and waited for NAYMEDICIC to play. Their a pretty new band to us but they’ve been gigging away in their native Manchester for a couple of years now. a recent move to west Cork has seen the band picking up some great press and also some pretty big gigs. These kind of gigs can be seen as like a corporate thing and I suppose they are but has to be said the Irish + good music + a drink or two = a pretty damn good time!

NAYMEDICI came on after the last race and started with a excellent trad instrumental. They’ve the standard celtic-punk set up but with fiddle, instantly reminding me a lot of the Lagan. What followed was some great traditional Irish folk music with loads of covers of The Dubliners kind but with some nice obscure songs in as well as the family favourites.

the crowd were lapping it up and all ages from 8 to 80 were jigging away. Chucking in quite a few of their own songs was probably a brave thing to do but the crowd didn’t notice. The only difference was the rise in tempo of the songs and the dancing getting that bit faster. Best song on the night was their hit ‘Paddy McGee’ sounding just like The Dubliners fronted by Mike Harding!

One of the reasons people love celtic-punk music is its infectious energy and fun and NAYMEDICI have got it in bucketfulls.

Needless to say I look forward to seeing them play a gig with their own material and having a quick chat and a couple of fags with the boys afterwards it hopefully wont be too long before we get them to London to entertain us!