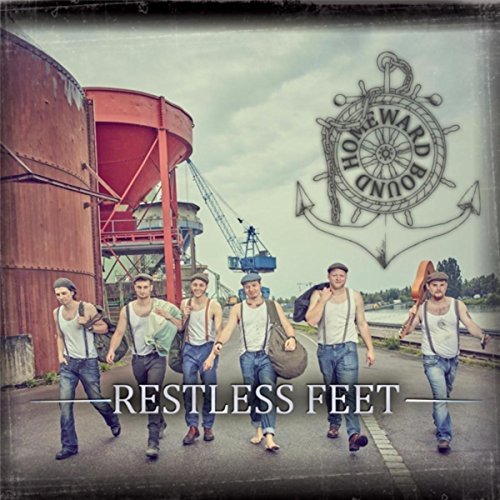 In a genre that most music fans would probably think of as being extremely small its heartening when you come across a band that you think is new only to find out they have been around a while and this is not their debut album as originally thought. That after all is a sign of a very healthy scene and long may it continue that I don’t know every band out there!

Restless Feet originate from the beautiful old town of Freiburg in the south-west of Germany and were in fact formed back in November, 2011. Their debut album Almost Irish contained seven tracks of which but two were covers but did contain the amazing track ‘Empire Of Gold’. If I had come across this song back then then I can tell you with all certainty that I would have been following them ever since.

The mini-album also contained a couple of Breton songs showing that Restless Feet know their onions and were not content to just rattle out the old favourites. That’s not to say they can’t play the old faves as it also contained a couple of Irish folk standards but it set the pace for their following album, which was about to hit the streets over three years later, just in time for St Patrick’s Day 2017.

I have mentioned on this site before the special affinity that German’s hold for the Irish. Time and time again when I have met German folk I have been impressed by their knowledge of Irish culture, music and history. That Celtic are by far the most popular foreign team among German football supporters is testament to that affinity. There are several theories for this but my guess is that the Germans love a drink and a good party so it has got to be between us and the Mexicans aint it? Here Restless Feet offer up six self penned tracks and seven carefully chosen covers that go to show that the German love for Erin still shines strong and shows no signs of abating either.

Homeward Bound begins with ‘I Hold Sway’ and gets proceedings off to a great start. All acoustic but with a real punk rock feel. The Irish/celtic sound is supplied by the energetic fiddling of Marcy and Kai on tin whistle and banjo while the rest of the lads, Maggu, Arthur and Alex, supply a steady and sturdy back drop.

(the first single and official video released from Homeward Bound)

Fast and over in a flash and leads into ‘The Cabin’ a very short accordion number used as the intro to the following song ‘Wake’s Souvenir’. Slowish but still tuneful and catchy that speeds up in the middle and its not often you will hear an acoustic guitar being thrashed so loudly! Many Euro celtic-punk bands include flute and I was a late convert to the idea but here, as it usually does, it sounds fantastic.The first cover is ‘The Shores Of Botany Bay. First time I ever heard this was by the legendary Irish folk band The Wolfe Tones and Restless Feet do it justice with a wee Irish trad tune slapped into the middle making it extra bit special. Restless Feet have two main vocalists and they slip from song to song so forgive me for not which is Kai and which is Maggu. They both sing in a distinct German style with the accent strong but at the same time absolutely clear as crystal and while the CD does come with the lyrics included you don’t need them at all. ‘Sailor’s Yarn’ is a great tune with superb fiddle and backing gang vocals. In the search for the song that represents celtic-punk the following, ‘Waste My Throat (On Irish Folk)’, song is a worthy contender. A real footstomper and one for the crowd to join in with cries of “yeah” peppered throughout. Would have maybe perhaps benefited from some driving electric guitar but still a album high point. Restless Feet next show us that their is more to their band than just punked up folk songs with ‘Tuneset’ which is in fact two and a half minutes of full on Irish trad folk with three superb reels- ‘Irish Washerwoman’, ‘Cooley’s Reel’ and ‘Maid behind the Bar’. Banjo, fiddle and flute giving the impression that what you got here is a trad band not an actual celtic-punk one. Next we have ‘Greenland Whale Fisheries’ which I am sure most of you will know as it has been covered by most bands between The Dubliners and The Pogues and has even been taken as a name for one of the celtic-punk scene’s most popular bands. Now I love this song but would have preferred something a little more off the map but we have to remember that to audiences not accustomed to Irish music this is a song that will get people off their bar stools and up jigging. On that first album Restless Feet showed they weren’t adverse to playing the odd rebel song and here they serve up the glorious ‘The Boys Of Wexford’. The song commemorates the Irish Rebellion of 1798 and, more specifically, the rebellion in Wexford.

Made famous by The Clancy Brothers and The Wolfe Tones its a great version and sure to get the blood pumping of any freedom loving patriot. The last self penned number is ‘The Ballad Of Johnny Doran’ and bejaysus it’s an absolute corker. Loved it. Slowish and catchy with the backing minimal and the fecking brilliant chorus telling of a traveller’s life.

The album standout and not just for me either (see the review on Celtic Folk punk here). We are back in Pogues/Dubliners territory again next with version of ‘The Irish Rover’ and not much to add but its as good as you will hear and the Bhoys stick fairly close to that most famous version. We are shipping up to shore and I feel I really must take off my hat and salute Restless Feet for including ‘By Memory Inspired’ here. Growing up with Irish music I thought I had heard just about every rebel song but this had passed me by. Again it’s a song commemorating the Irish Rebellion of 1798. Slow and quiet and beautifully played and sung from the heart.

“By Memory inspired And love of country fired, The deeds of Men I love to dwell upon”

The tragic defeat of that rebellion is remembered and the brave men who gave their lives names are sung with a poignancy that many Irish bands could learn from. Daniel O’Connell, William Orr, John Mitchel, John McCann, John and Henry Sheares, Fr Thomas Maguire, Robert Emmet, and others are recalled. Homeward Bound comes to an end with ‘Rolling Down To Old Maui’ and I was actually dreading another acapello version of this but the Bhoys turn it into a great tune with brass instruments and superb fiddle turning it into one of the best versions I have heard straight up!

So forty minutes of class acoustic Irish folk punk from a bunch of Germans with a real feel for what they are playing. Whether it’s playing their own material, classic Irish standards or even lost and forgotten gems of Irish folk, Restless Legs are a great addition to the celtic-punk scene and to landlubbers everywhere. With recent gigs supporting some of the scene’s biggest bands, including our own Ferocious Dog, the future is looking very bright for them.