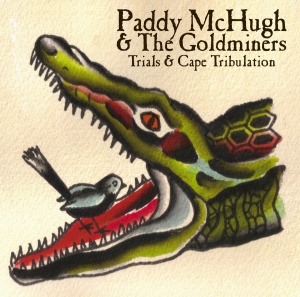 So when my old mate Donny Mark put a link on my facebook for a track called Snowmen by Paddy McHugh a while back i did not hesitate to check it out knowing his similar taste in Irish/celtic folk/country punk!

And what a stormer, angrily yet melodically telling the story for the men who worked in the James Hardy Asbestos factory in Parramatta, a few miles inland from Sydney in the 6ts and 7ts. Specifically it tells the story of Bernie Banton, who after suffering from Asbestosis and Mesothelioma, led a national campaign to stop the use of asbestos and get compensation for the workers afflicted. Banton died in 2007 aged only 61 but having won much of the fight .. The song grabbed me straight away with it’s beautiful simple banjo and brutal but clear lyrics, building to the chorus of

” .. and we’ll sing to our last breath James Hardie caused our death!”

So I was straight onto Amazon and buying McHughs album and EP, where he is accompanied by his band The Goldminers. And thru cyberpsace it came, at the tap of a key, and I was listening to them. It’s was all good stuff, as his website says, “honest no bullshit country ” .. but then the song “Dan O’Halloran” came on.

Now I’ve heard plenty of tough songs in my time, from Folk to Blues to Oi and Rap, but this is one of the toughest saddest songs I’ve ever heard. It’s a tale of a young man who never had the breaks, then made the fatal mistake of ripping off a biker gang .. some mistake … get it, listen to it .. trust me you won’t ever forget it ..

” … nobody knows what happened to Dan O’Halloran,

except it makes me shiver,

And turns out unsurprisingly Paddy McHugh has a great mash-up background. Born into the ‘Country Music Capital’ of Australia [yes they have one!] Tamworth NSW, he started as a young country busker but soon moved onto being a punk in Sydney and fronting folk punk band Sydney City Trash.

After that he decided to slow it down and I for one am glad he did.