Tag Archives: And The Wasters

Will Tun And The Wasters carry on exactly where they left off except without Will Tun and with kind of a new name but still with plenty of that explosive folk’n’punk’n’ska rebel rocking they are renowned for!

We first heard of Will Tun And The Wasters a good few years back when I got a call out of the blue from someone begging me to let their band support The Dreadnoughts and The Lagan at Mannions in north London. They would even do it for free they were so desperate. Music to any music promoters ears so they were booked straight away. They arrived at the venue from universities from right across England and played a blinder, going down an absolute storm. Very young and enthusiastic, their energy was infectious as well as their music bringing with them equal doses of folk, celtic, punk and ska. Fast forward a few years and now mostly settled in Bristol they had become firm festival favourites as well as gigging and touring the length and breadth of these islands. Then all of a sudden vocalist Will Tun announced he was off. Nothing personal but it was time to get a proper job or something. Rather than agonise over what to call themselves they just dropped Will from their name and decided to just call themselves And The Wasters. I love it and think its genius! 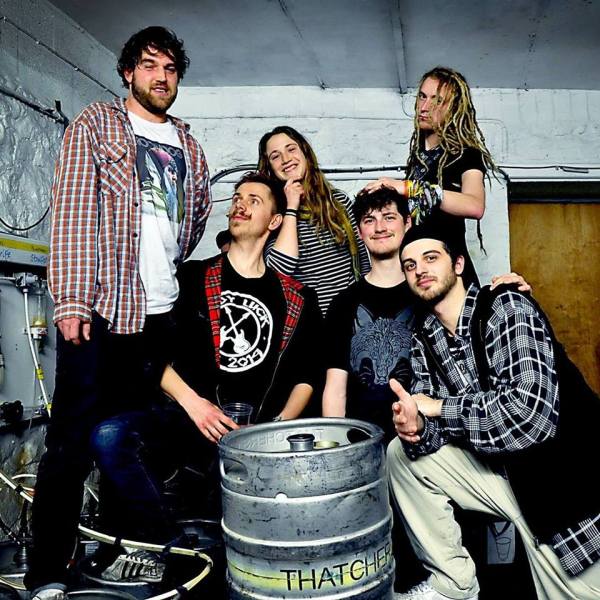 Last year And The Wasters played the main stages at popular English festivals such as Bearded Theory and Boomtown Fair and also completed an extensive tour of Europe. Adding elements of Latin, dub and even jazz to their usual brand of folk, punk and ska played with accordion, trumpet and fiddle. So after a year of playing as And The Wasters this new 5 track E.P State of Repair is their first release post-Will Tun and stands up well next to their album release from September, 2015 The Anachronist’s Cookbook which came out not long before Will’s decision to leave the band.

The EP kick’s off with ‘Lions Share’ and this is proper what we use to call festival music. Catchy ska based music but with hints of something a bit more aggressive below. The trumpet is leading the way and the band gel fantastically well and it’s a grand start to proceedings. Jo’s accordion rears its head towards the end and if we thought they would be hampered by Will’s absence then we were wrong. Next is ‘Small Victories and it’s more of the same. Still catchy and music to get you on your feet.

They may have left their more overt celtic-punk/ folk-punk sound behind but it’s back with a vengeance on the re-cycling anthem ‘Reduce, Reuse, Rebel’ all being it smothered in a rather lovely ska beat with again some great trumpet playing. ‘Bound as One’ adds Balkan folk into the mixture and stirs it about. This band sure do catchy well before the EP wraps up with the slow ‘Intro Dub’. None of the rowdiness of before bit more of a head nodder this one!

The past few years have seen the band taking their feel good music out beyond the usual safe spaces bands normally go. This band would literally play anywhere they can so attached are they to the idea of DIY music. The idea that bands can do it all themselves without the need for managers, publicists or record deals. But don’t be thinking they are just some happy-go-lucky ska-punk band version of The Wurzels though. Their music is only matched by what they have to say. That attachment to DIY only echos their positive message of solidarity, friendship and collective action. The band live by their message and their beliefs, being active within the DIY music scene and by lending support to various good causes.

GET STATE OF REPAIR