After a brief hiatus Celtic-Punk heroes and legends The Mahones have returned and are back with a bang with the first of a four album package slated for release in 2018.  With new album Love + Death + Redemption they hit the heights but maybe not so in a way we would expect them to. 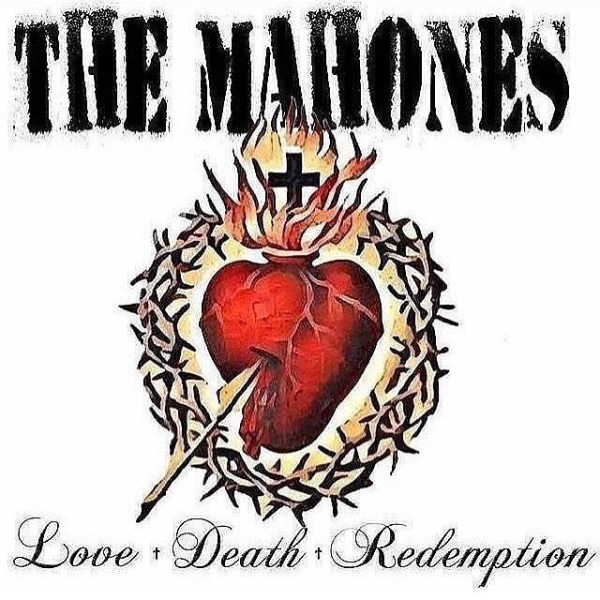 Well what to say about The Mahones? If you haven’t heard of them where have you been hiding? Under a rock? Please bow your head and go away and rectify the situation as soon as you finish this review. While the Dropkicks and the Mollys have gotten the glory and the massive stadium gigs and tours there has been only one constant wherever you are 0over the last twenty-eight years and that has been The Mahones. Come rain or shine they have always been there. When I was a young punk rocker in my wee one horse town growing up the first, second, third, fourth etc., punk band I ever saw was the UK Subs as they were the only punk band that would play there. The same can be said of The Mahones and their constant touring. I am absolutely certain they rock up in some towns somewhere where they are the only physical link to the Celtic-Punk scene and that is one of the many reasons they are held in such high esteem. The band means the world to me personally as it was at one of their legendary gigs here in London I asked, and was granted, the hand of my good lady.

Their new album Love + Death + Redemption finds The Mahones in reflective mood. The full on Irish punk is toned down but it is still unmistakable Mahones. Instead the band have gone for a gentler more contemplative album with only brief flashes of Irish punk. The album opens with ”I’m Alive (Save Me)’ and as with most of the tracks here it is written by Finny and if The Mahones had a trademark sound then this song would be it with Finny’s voice straining and aching through a steady beat with the distant ring of the tin-whistle and layered guitar. Joined by the beautiful voice of Priya Panda from the Canadian hard-rock band Diemonds on vocals the words tell, possibly, of the sad break up of his marriage, but not the friendship, to fellow band member Katie. Be prepared to shed a tear here Celtic-Punkers. Throughout the album they are joined by a motley crew of special guests and on this song that also includes fellow Canadian rocker John Kastner on backing vocals and guitar. It’s a great start though not quite the rabble rousing that we are use to it is still powerful in other ways. It sets the standard for the album and they don’t disappoint as they follow this up with ‘Heroes Die’. The tune may be a bit more upbeat but again the words find Finny in reflective mood. 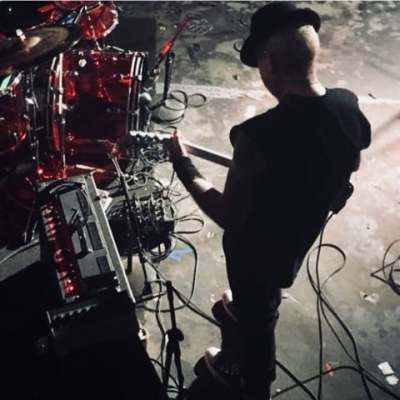 Next they slow it down a bit for ‘It’s Gonna Be Alright’ and Finny is joined by one of his heroes Johnny Fay  of the legendary indie band Tragically Hip. The lyrics of the song are maybe directed by Finny to himself but what do I know I’m just a Catholic Irish boy. It’s a restrained folksy tune and you either get and love his style of vocals or don’t and I have always loved it. Perhaps more on record than live even. The album is beginning to sound like a who’s-who of alternative Canadian music and on ‘Never Let You Down’ the band are joined by singer-songwriter  Sarah Harmer and her stunning voice is the perfect counterpoint to Finnys. A slow burner of a song that slowly builds and builds and with the aid of Michael O’Grady’s tin-whistle and Ryan Chopik’s mandolin it’s the most Celtic sounding song on Love + Death + Redemption. Back in October, 2016 Finny’s mother Anne McConnell-Strong passed away in a tragic accident and her loss has been felt heavily by Finny himself obviously but also the wider Irish community in Vancouver and Canada where Anne was much treasured. This explains in full the nature of the album and on ‘Mother, My Angel’ The Mahones pay tribute to this wonderful woman and all she did for others with a dazzling swirling almost psychedelic Celtic number. 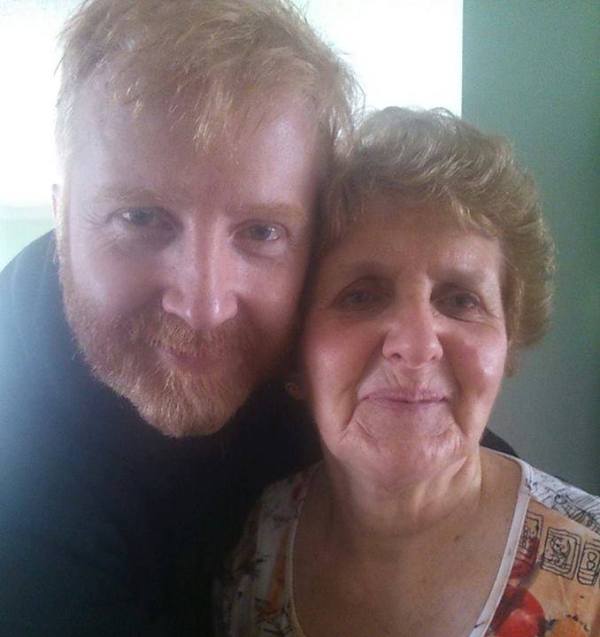 Anne McConnell-Strong 1934-2016. Anne Kearney was one of five girls born and raised in a typical thatched-roof cottage in Oranmore, a quaint village in the west of Ireland on the edge of Oranmore Bay, an inlet of Galway Bay. Her sister Mary still lives in the old family home.
She studied nursing in England and later, along with first husband Brendan McConnell and the couple’s two eldest children, daughters Ita and Dympna, emigrated to Canada in the 1960s, eventually settling in the Limestone quarter. In Kingston, the McConnells owned and operated the old Frontenac Hotel on Ontario Street and, in time, the Irish pubs Finnegan’s and Muldoon’s, bringing in top-name Irish acts such as the Clancy Brothers and the Irish Rovers In 1978, Anne founded the local chapter of Comhaltas Ceoltóirí Éireann, was elected chairperson of the Eastern Comhaltas Regional Board in 1988, and spent nearly four decades ceaselessly promoting the development and preservation of Irish traditional music, dance and culture in Canada and the United States. Suaimhneas síoraí tabhair dí, a thiarna, agus go lonraí solas suthain uirthi.

We are back on Celtic territory next with the album’s first cover and it is expertly chosen. From The Waterboys now classic album Fishermen’s Blues which saw them abandoning their pompous rock sound for a mix of Irish and Scots traditional music. The Mahones keep close to the original and do the song more than justice.

Again the lyrics tell of the pain Finny and his close knit family has suffered. We are more than half way through the album before we see any sign of the (in)famous Irish punk that The Mahones are (in)famous for and it comes courtesy of guitarist Sean Ryan on vocals for ‘Win Some, Lose Some’ with backing vocals from members of his other band Irish Nails. Its fast, furious and glorious and over in just over ninety seconds and will I am sure fill the moshpits of all corners of the globe. Next up is another cover this time ‘Heroes’ written by another of Finny’s favourites David Bowie with Brian Eno. Again it is played fairly close to the original but with some lovely flourishes and Mahones touches that move the song far beyond just being another bog standard cover. The song tells the story of two lovers, one from East and one from West Berlin and has become one of Rock musics great songs. We are nearing the end of Love + Death + Redemption with ‘Angels’ the last of the original songs here and again its reminiscent of earlier song ‘Mother, My Angel’ with Finny’s voice distorted and detached while the music swirls around his words. It’s not The Mahones we are use to but it’s beauty is undeniable. The curtain comes down with the great Irish classic penned by Pete St. John ‘The Fields Of Athenry’. Over the last decade or two the song has become perhaps the most recognisable of all Irish songs and recorded countless times by artists of all genres. Finny is accompanied on vocals by Canadian-Irish singer-songwriter Damhnait Doyle. I always wonder why so many bands choose this song to record these days but then when you hear it sung with passion and pride it has an affect on your heart and soul that shows exactly why. It is a song we Irish can be proud to give to the world. It ends with the whispered words “Love you Mum”. Leaving us in no doubt who the song is sung towards.

The album was produced by Finny himself and engineered and mastered by Gene Hughes. It was part recorded back in the auld country at The Doghouse Studio in Belfast as well as Red Rhino in Montreal and Telejet Music in Toronto. The production as usual is impeccable, it is well known, after all, what a perfectionist Finny is. Love + Death + Redemption was written for and dedicated to the loving memory of Finny’s late Mother Anne. No Irish boy gets over the loss of his Mammy…

the four upcoming Mahones releases for 2018

So as stated not your typical Mahones release but none the worse for that. The tragic events of the last couple of years have I am sure taken their toll on Finny but here he has managed to put a voice to those emotions and feelings, and maybe his demons as well, and make something that is undoubtedly good for his soul and whats good for Finny is good for us too. A grand album, one to listen to with the headphones on first and catch it all. With another three Mahones slated for release this year Love + Death + Redemption is an incredible start and I can’t wait to hear the others. Glad to have you back with us Finny you were sorely missed.

(The Mahones at ‘Chien a Plumes’ Festival in Langres, France on 6th August 2017)