Americana, Classic Album Reviews, Compilation, Free Download, Traditional, USA, Wales January 9, 2018 1 Comment
FREE DOWNLOAD
Paul Robeson was one hell of a man. Outstanding in so many areas- scholar, athlete, singer, actor, linguist – the list seems endless. He was also a fearless campaigner for human rights, which led to his persecution by the authorities. His powerful bass voice had an immense power but also a gentleness and a warm sincerity that made it special. A unique voice and a unique person and Songs Of Struggle is a great introduction.
We will never see his like again.

Born: April 9, 1898  Princeton, New Jersey
Died: January 23, 1976  Philadelphia, Pennsylvania
Paul Robeson was one of the greatest figures of the 20th century, but he has been almost written out of American history due to his fearless advocacy of the principles of civil rights, equality and democratic freedom. He was an athlete, a qualified lawyer, a professional singer and star actor, but above all he was a campaigner for human rights the world over. A giant of a man in all respects, perhaps his most notable single attribute was his fine bass voice, and that quality can now be enjoyed and appreciated again through this album of some of his best known songs, including many of the songs reflecting his political allegiances.

Robeson saw singing and acting as a part of political campaigning after a visit to Germany and the USSR in 1934. Two factors combined on that trip, his hatred of Nazi fascism, and his admiration for the Soviet Union’s legislation for racial equality. In 1937, he sang in Spain for the Republicans fighting fascism in the Spanish Civil War. The following year he came to Wales to film The Proud Valley, a film which meant more to him than any other, and which introduced him to the miners of the Rhondda Valley, and they struck up a friendship which lasted for the rest of his life. Returning to America, his fame grew with the nationwide broadcast of ‘Ballad For Americans’ in 1939, a song which was at once a declaration of love for America and a strong demand for equality. He travelled the country enthralling audiences with his songs and speeches, refusing to perform to segregated audiences, and encouraging black support for the war effort to defeat fascism which

“would make slaves of us all”.

As America entered World War 2, Paul achieved massive success on Broadway and nationwide, from 1942 to 1944, and redoubled his political campaigning against fascism, racism and colonialism, espousing the right of black people to full equality, the right of African peoples to self-government, and the progressive labour movement. His support for the war effort shielded him from criticism at first, but after the war, his views regarding the Soviet Union and African independence brought him into conflict with President Truman’s policy of containment, and it also became evident that Truman was not going to move on human rights. A growing number of Americans were also turning against him, and attempts were made to curtail his public performances. In 1947, in total disgust at such attitudes, he announced he would take two years away from the theatre and concert stage, in order to

“talk up and down the nation against race hatred and prejudice. It seems that I must raise my voice, but not by singing pretty songs”.

In 1949 he made his most controversial speech at the World Peace Conference in Paris, in which he decried the concept of American Blacks’ participation in foreign wars on behalf of a government which treated them as second class citizens. He returned to an America which was rapidly turning against him, the FBI held an ongoing investigation into his alleged ‘communist ties’, their were riots outside his concerts, and all this culminated in the revoking of his passport in 1950. This attempt to silence Paul Robeson started a period of political resistance using songs as his weapons which is unparalleled in modern history. In 1952, Canadian union leaders organized a series of concerts at the Peace Arch Park on the US-Canadian border, and invitations flowed offering Professorships and performances of Othello at Stratford. He was also invited by the workers he had befriended during the filming of The Proud Valley to sing at the South Wales Miners’ Eisteddfod.

In 1957, with the laying of the transatlantic telephone cable, Robeson gave his first Transatlantic Concert to an audience in Manchester in May, and the second in October to the Grand Pavilion at Porthcawl. In his autobiography Here I Stand, Robeson said

“I cannot say how deeply I was moved on this occasion, for here was an audience that had adopted me as kin and though they were unseen by me, I never felt closer to them”.

His passport was returned to him in 1958, and Wales was one of his first destinations, where he appeared and spoke at both the National Eisteddfod at Ebbw Vale, and the South Wales Miners’ Eisteddfod at Porthcawl. 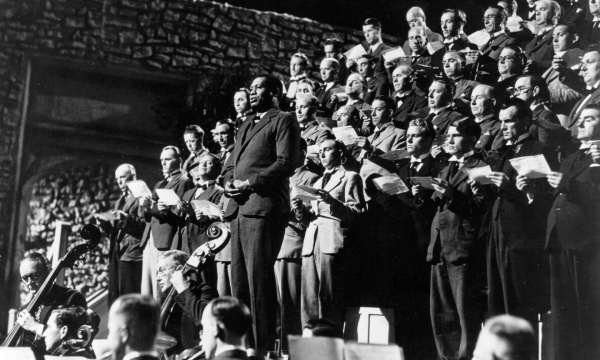 Paul Robeson singing with a choir in a scene from The Proud Valley.

He spent the last years of his performing life abroad, but returned to the US when ill-health led to his retirement in 1963. He lived the final years of his life in seclusion in Philadelphia and died there on January 23rd, 1976. On his tombstone is his personal statement that

“The artist must elect to fight for Freedom or for Slavery. I have made my choice. I had no alternative.”

Thus this particular compilation of music highlighting both Robeson’s voice as well as his strong convictions is extremely appropriately themed. Much of this music is about political struggle. Opening with ‘Joe Hill’ one of America’s most famous folk songs and finding time to support the Irish people

by singing one of the most spectacular versions of ‘Kevin Barry’ ever recorded. There is a superb article here by the Dublin based Come Here To Me web-site on Paul’s visit to London and how he came to learn the song. Kevin Barry was 18 years old when he was hanged in Dublin on November 1st 1920. Arrested after a battle with the British Army reports of his torture in Mountjoy Jail soon circulated but Barry refused to name his comrades. He was given a death sentence but it was widely believed that this sentence would be commuted, and that the British authorities would not dare to execute such a young man. His death is possibly the most poignant in Irish history.

Other pieces concern the simple struggle to continue life in the face of tribulation. They all display a worldly strength and the understanding of a man that clearly was familiar with these emotions. The performances are often minimal, using only piano and voice. Highly appropriate to these works, as this lends a highly personal atmosphere. Additionally it brings solid focus to the incredible talent that Robeson possessed. He was well known for learning languages, and singing/recording in the original tongue and here we have songs in English, German, Russian and Spanish. The sound on these recordings is a revelation. No tape hiss and no noticeable album noise. The fidelity is bright and far better than many vintage recordings. The recordings are from 1927-1942 and his most famous song ‘Ol’ Man River’ is one of the earliest here and sounds fantastic. More than 70 minutes, including a surprise 1939 poetry reading to conclude, just listen to that diction and voice control!

This is a collection that can be truly recommended.

with thanks to Zero G Sound- if you want music like this to light up your life then go find them here.

This album was brought to you as part of our regular series where we bring you something a little bit different to what you’re maybe use to. Lost or hidden and sometimes forgotten gems from the legends and also unknowns that have inspired and provoked folk music and musicians right up to modern age celtic-punk music. The albums are usually out of print so we can provide a free download link for you.

You can find our Steppin’ Stones page here with the full list of albums to choose from.