Pouring out of the sometimes sunny Rochester area of New York state, about 300 miles from NYC, comes the brand new album from one of the areas favourite sons The Sisters Of Murphy. Released last Labor Day weekend Working Stiffs Unite! is their debut full length album after two EP’s, Holy Show in 2011 and On The Wrong Side Of The Road in 2013. Formed either nine or ten years ago, their memories are a bit sketchy, the band have been plugging away playing regularly since and have garnered great reviews and a multitude of fans of their solid working man (and woman) Irish rock’n’folk’n’roll. Those first two EP’s released on Silverdish Records were a great combination of folk, rock, pop and traditional Irish and unusually were pretty much made up entirely of the bands own compositions. Tight, well played celtic music and with this release they will surely get the recognition they deserve. 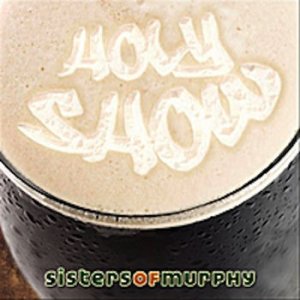 Some of Rochester’s earliest settlers were Irish, even before the dark days of the so called ‘famine’ and even today make up an astonishing 16% of the population. The Hibernian Benevolent Society was formed in 1828 and the Irish soon after founded St. Patrick’s church. There were at least 60 Irish families and an estimated 800 Irish-born men in Rochester by 1834. They built log cabins in an area that became known as Dublin and as only the most dirty and dangerous jobs were open to them many began work on the Erie Canal while others toiled in the flour and lumber mills. Many incidents of anti-Catholic and anti-Irish bigotry were reported and the local press attacked “popery” and these newly arrived immigrants but with the election of Henry O’Reilly as Postmaster in 1838, the long tradition of Irish involvement in politics in Rochester began. Of course the Rochester Irish were very active in sending aid back to Ireland as the ‘famine’ took hold and people were literally fleeing for their lives. Many sent money home to bring relatives over and by the early 1850s, the city’s population had grown by 7,500 with more than half coming from Ireland. In his 1957 book, Blake McKelvey wrote in Rochester History about the Irish

When Jeremiah O’Donovan, an Irish poet (and revolutionary!), reached Rochester in 1855, he characterized the city in his diary as the “promised land.” … One Irishman had risen to the head of the largest store in the city. He described another as the founder of a large clothing firm, and identified several more as grocers, meat merchants, furniture dealers and a variety of other tradesmen. O’Donovan found one Irish doctor in Rochester…

Gradually though anti-Irish feelings went away and just as in the the rest of America they helped shape all that was good and great about the places wherever they shipped into. The Irish population of Rochester may have shrunk in recent years somewhat but the community is still strong and flourishing and proud of their noble history! The Irish are still here and they are still fighting!!

Working Stiffs Unite! kicks right off from the very first bars with ‘L.O.V.E.’ and its full on Irish celtic rock coming out at ya. The fiddle and banjo mixing it up with the more traditional rock instruments and it all get’s the album off to a great start. ’40 Days At Sea’ starts off in an acapella style similar to something you could imagine Ronnie Drew doing before the band come in and again it’s as catchy as hell with the band combining perfectly and the production getting it just right too with all the bands instruments mixed just right. ‘One Word Of This Kiss’ begins with a thrashing guitar and while doesn’t scale the heights of the previous songs in speed it certainly makes up for it in energy. ‘Come Back To The Emerald Isle’ has a real country/Americana feel to it with the fiddle leading the way and Jonas voice giving just the right amount of honky tonk! ‘It’s A Shame’reminds me of London Irish bands like The Bible Code Sundays and The Craicheads. A poppy song that is as catchy enough but must say I prefer the harder edged songs here.

Next up is The Sisters Of Murphy’s epic song. Probably their signature track, ‘Green Over Red’. The song begins with the sound of an engine and soon uilleann pipes pipe us into a intro soon joined by acoustic guitar and the rest of the band join in this poignant song about emigration, fighting oppression and making your new home your own.

The year is 1925, and Tipperary Hill’s alive
With so many Celts who came across the sea
Listen to the children sing, dancing as the church bells ring
Laughing and finally feeling free

Youth out marching in the street, stones in hand; there’s no defeat
No way in hell we’re going back again!
Huckle Ryan saves the day, says these boys won’t go away
There’ll be more than lights getting broke today

A real fist in the air singalong before the band ramp it right up for the second part and we are away with a reel that will get you beating up the dance floor. The standout track here that encapsulates all that is good about the Sisters. Following this they take a much more traditional folk route and it still works and ‘Jack Haggerty’ sounding a bit similar in style to Paul Brady version of ‘Arthur McBride’. On the title song ‘Working Stiffs Unite’ its the story of the struggling worker that the band bring to us.
They are quite right to be angry and dismissive of the current political machine that ignores everyone expect their friends in big business, the song does have a seething heart but the tune carries you along tapping your toes. ’17’ is a beautiful slow ballad that swirls in moments that build up to a crescendo before dying down again. This is followed by a live version of fan favourite ‘Katie Dear’ and fits in perfectly with the rest of the album with a great trad celtic folk sound and crowd singalongs. Now that’s your lot unless you get the version available below on Bandcamp where you get an extra free track. The ‘Green Over Red (Radio Mix)’ where to be honest it doesn’t sound that much different except its much more shorter and snappier.

The Sisters Of Murphy debut album captures perfectly that Irish-American celtic-punk sound that I love so much. Catchy and compelling and steering a fine line between humor and heartache and seriousness and piss-taking throughout all of the eleven songs. The album lasts nearly fifty minutes and is made up of all self penned tracks that tell the story of the Irish-American working man and woman. It’s election year in the States and with the choice in front of us are two enemies of the working class so as usual we have no one to rely on but ourselves. Their is loads to admire here and along with their fellow, brilliant, Rochester Irish band 1916, The Sisters Of Murphy are putting NY back on the celtic-punk map.

(you can have a listen or two to Working Stiffs Unite! for free by pressing play on the Bandcamp player below. Before you buy it that is!!)

you can read Blake McKelvey’s 1957 pamphlet on the Irish immigrants in Rochester here.