Anyone remember 2015? That was the year of the Hungarian celtic-punk record. A whole host of bands coming together in a perfect storm and absolutely completely dominating the scene that year. Loch Nesz, The Jolly Jackers, The Crazy Rogues, The Scarlet, Firkin and Paddy And The Rats all featured in the London Celtic Punks end of year ‘Best Of 2015’ charts and all received glowing critical praise galore. What quite happened to them all last year is a mystery but the Hungarian celtic-punks are back with a fecking bang! So for one week we are running a Hungarian celtic-punk special. Three reviews in seven days from three amazing EP’s from three equally amazing bands who all have completely different styles of celtic-punk. 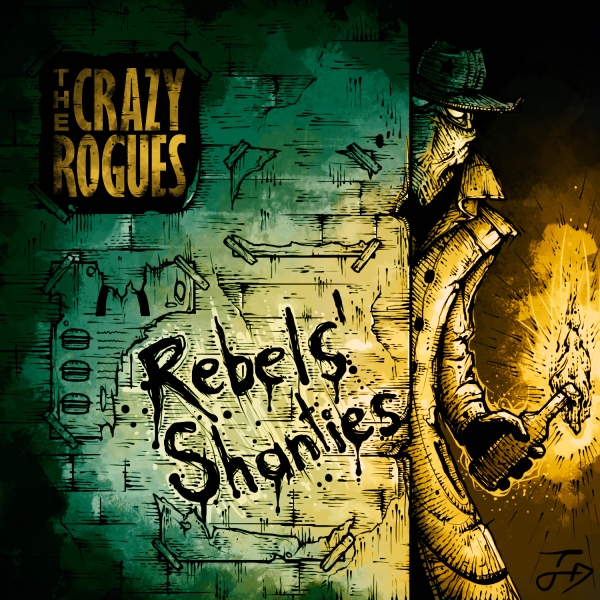 The Crazy Rogues are from Veszprém in mid-Hungary and were formed in 2014 making them among the earliest of the second wave of Hungarian celtic-punk bands.With two EP’s behind them, one of Demo versions and another called Chapter 1 which we reviewed back in 2015 here giving it a massive thumbs up. They have named their style as ‘Rogue ‘N’ Roll’ taking in elements of punk, country and bluegrass as well as Irish and Celtic. The EP begins with ‘And Then the Sky Fell’ and its fast fiddle led celtic-punk with good ole’ fashioned punk rock drumming and punk rock guitar playing in the background at times pushing the fiddle forward. ‘Fleet’ is up next and is a bit more traditional celtic-punk of the Flogging Molly kind. One of the things I liked on The Crazy Rogues previous releases is how they can switch from their folkier side to their more punky side with ease. They slow it down next with the sad tale of ‘The Sad Leprechaun’. A leprachaun is a mischievous mythical creature that roams the Irish countryside playing tricks on humans. Many though think they are real, including my Grandparents! Again the fiddle is the lead here and Verrasztó’s vocals are suitably angsty as he tells us of the life of these solitary creatures. The flute appears here and like a lot of Hungarian bands in particular it’s used to good measure.

They speed it up next with the fast paced punky song ‘Mutineers (must DIE)’ and though it does seem funny to call something a ‘traditional punk rock’ song this is it! Shouty gang choruses and fast guitar and then all of the sudden banjo pops up and we get a short blast of each band members individual talents before it ends. Short and sweet and snappy as hell and then we drift into ‘Silver Hair’ which reminds me of the sort of bluesy country folk that Shane MacGowan and The Popes were so f’ing brilliant. Superb mandolin here from Fellegi and I have to say that the mando and the banjo have been a bit low in the mix thus far so great to hear it dominate on this track. Well that is until right out the blue it suddenly switches to a ska song and the song ends with an absolute flourish with electric guitar helping it speed to a finish. The absolute standout track here for me. Can’t tell you how much I enjoyed this song! The EP ends with the song ‘Rebellion’ and is a tribute to the Easter Rising of 1916 when a small band of Irishmen and woman declared war on the British Empire. They took over several important buildings in Dublin and held them for a week against far superior British forces and many died during that week until the rebels were forced to surrender. The British executed the leaders of the rebellion and this led to a wave of sympathy which would eventually lead to full scale war across Ireland that would in the end see freedom for the 3/4’s of the country. Verrasztó’s voice is clear and loud and stamps out where The Crazy Rogues stand. A perfect celtic-punk tune with everything that makes celtic-punk great. Story based lyrics with a solid punk rock base embellished with Irish instruments especially the fiddle again. Songs to get you both thinking and dancing is what celtic-punk is all about!

So six Crazy Rogues composed songs that clock in at a very healthy twenty-five minutes and not a single sign of a cover version. All sang in English with a multitude of musical styles thrown into the celtic-punk mix and with very thoughtful lyrics about a multitude of subjects that are very easy to understand. Rebel’s Shanties is an excellent EP and The Crazy Rogues continue to forge ahead to make a name for themselves in celtic-punk circles. Like both their previous releases Rebel’s Shanties is available for ‘Name Your Price’ download which basically means pay nothing if you got nothing and a couple of pounds (or more) if you got a couple of pounds. This EP is certainly worthy of it.

So all in all a very impressive start for our Hungarian celtic-punk week. Check back in a couple of days for part two of three. If you are interested in finding out more about the great celtic-punk scene in Hungary (and if you got any sense you better be) the best place to find it is the ‘Celtic Punk/ Irish Folk Hungary’ group on Facebook here

Spotted by Chris in Folkestone!