GUESS WHOSE BACK? THE SOUTH SHORE RAMBLERS ARE BACK!

It must be pretty hard being the sole Celtic-Punk representatiove for a whole continent but The South Shore Ramblers represented Africa superbly till they called it a day a few years back. Well the good news is their back at the wheel and with some free downloads to give away too!

Formed out of the ashes of another superb Celtic-Punk band, The Sunday Punchers (check out the video for one of Celtic-Punk’s greatest ever songs here) , in late 2014 and after recruiting Martin Bezuidenhout as lead vocalist and frontman The South Shore Ramblers released a flurry of EP’s and videos during their short existence. Based in Johannesburg the South Shore Ramblers were always on the punkier side of things but always entertaining and their releases were always well received. In fact they achieved a pretty good double in our end of year Best of lists with Bare Knuckle Blackout  reaching #5 in the Best Of 2015 and Open Room Sessions #6 in the Best Of 2015. 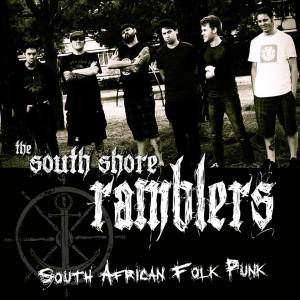 Debut release Bare Knuckle Blackout’ was all tales of hard lifes and hard lives, drinking to forget and drinking for the sake of it and the occasional happy time when all the bad times are forgotten. It began with the brilliant ‘Thirstday’ and from the very beginning you understood what the band is about.

The following year saw the release of Open Room Session and captured the guys in a raw live form. Rough and ready, but in a good way! Only three songs and just over ten minutes but it saw the release of the outstanding ‘Own Wicked Device’ accomapnied by a equally outstanding video. More music followed like a couple of covers from the Dropkick Murphys and even talk of a European tour before they dropped off the radar.

At the time all their releases were available for free download but the links are long gone now sadly BUT the guys have just released a couple of songs from back in the day. Two never-heard-before practice recordings of NoFx’s ‘The Greatest Country”‘and ‘Miami’ by Against Me!.

so with gigs returning and new music in their arsenal The South Shore Ramblers are back so get on their social media and keep a finely tuned ear out for them when they take the Celtic-Punk scene by storm.

Spotted by Chris in Folkestone!