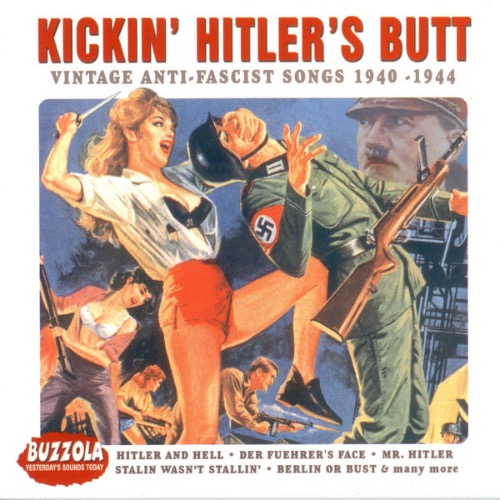 WHO DO YOU THINK YOU ARE KIDDING MR. HITLER?

Now this is an American release so that means the theme tune from Dad’s Army is sadly missing but that is still no reason to not to indulge yourself with a free download of this collection of anti-fascist songs written, performed and released between 1940 and 1944. Its often thought that the Japanese attack on Pearl Harbour started the American involvement in the war but America had already made massive loans to the British war machine and having placed a oil embargo on Japan steps were being made to join the war before they were pre-emptied by the attack on Pearl Harbour. The US army for instance had grown massively from 267,767 in 1940 to 1,460,998 by mid-1941, an increase of 446%. Pearl Harbor was an American naval base in Hawaii, that was the scene of a devastating surprise attack by Japanese forces on December 7, 1941. Just before 8 a.m. hundreds of Japanese fighter planes descended on the base. More than 2,400 Americans died in the attack and another 1,000 people were wounded. The day after the assault, President Franklin D. Roosevelt declared war on Japan. 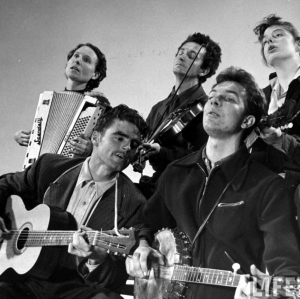 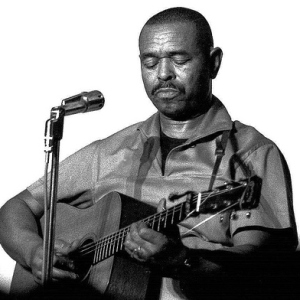 Knowledge coming out of Europe was slow but many in America, and not just on the left, realised the danger of Hitler’s rise to power and sought to agitate against it. It’s a little known fact that Germans made up the largest ethnic base in the States at around 17% which just happened to be the exact percentage of the American population who did not express support for Britain. Only 1% wished for a German victory suggesting that even this was inspired as much by pride in Germany as any dislike of Great Britain. The artists featured here contain such renowned figures as Woody Guthrie and The Almanac Singers folk singers from the from the protest movement all the way to bluesmen like the legendary Lead Belly and jazzmen like Spike Jones & His City Slickers. The album contains eighteen songs from fifteen diverse artists who in the main have disappeared from the air-waves but deserve to be known and studied and celebrated. Of course God is assumed to be solely on the Allies side, something I’m sure all in war believe.
Kickin’ Hitler’s Butt begins with a track from The Almanac Singers, a New York City-based group, active between 1940 and 1943 and formed by Millard Lampell, Lee Hays, Pete Seeger, and Woody Guthrie. They performed songs that were anti-war, anti-racist and pro-union. The Almanac Singers felt strongly , just like London Celtic Punks do, that music could help achieve these goals. Music is one of the great uniters and one of the areas of life where people of all races and religion mixed. A cappella gospel  group The Golden Gate Quartet’s contribution to the album, ‘Stalin Wasn’t Stallin’ wasn’t out of pace with it’s praise of Joseph Stalin with American public feeling at the time. Written in 1943 by Willie Johnson even Roosevelt had this to say

“The world has never seen greater devotion, determination, and self sacrifice, that have been displayed by the Russian people and their armies under the leadership of Marshall Joseph Stalin”

and it’s true that many of the most significant battles in the War were won by American and Russian forces co-operation. The Southern Sons Quartet’s ‘Praise The Lord And Pass The Ammunition’ is another gospel a capella song written in response to Pearl Harbour by Frank Loesser in 1942. The song tells of a Sunday morning in December 1941, and the chaplain is asked to say a prayer for say a prayer for sailors aboard a U.S. navy ship under attack by the enemy firing from all directions. The chaplain puts down his Bible, mans one of the ship’s gun turrets and begins firing back, saying “Praise the Lord and pass the ammunition.”

“Praise the Lord and swing into position
Can’t afford to be a politician
Praise the Lord, we’re all between perdition
And the deep blue sea”

The Southern Sons remain the most successful African-American gospel quartet music groups. Next up is Jazz Gillum and ‘War Time Blues’. William McKinley ‘Jazz’ Gillum was an blues harmonica player whose recordings nearly all come from the 1940’s. Jazz was shot dead On March 29, 1966, during a street argument in Chicago.
The Florida Kid performs the simple but effective ‘Hitler Blues’ on piano while next up we have two collaborations between some real legendary figures. Sonny Terry and Brownie McGhee give us ‘Move Into Germany’ and Lead Belly and Josh White perform ‘Hitler Song’. Famous in their own rights they all became involved civil rights protests and recorded Piedmont blues, country blues, gospel music and social protest songs. Following is another absolute legend in Woody Guthrie. Woody has featured on these pages many times and it is no exaggeration to say he remains the most significant figures in American folk music inspiring several generations, both politically and musically, since his death from Huntington’s Disease in 1967. He performed with the slogan “This machine kills fascists” on his guitar and he is one of the few artists here who is still largely celebrated. Josh White performs solo next with the amazing ‘Fuehrer’. The song tells of a German soldier, on the Russian front, starving and freezing to death dreaming he could go back home to Berlin. A sad song and beautifully played but not devoid of humour too.

“Tell me, my Führer, what can I do?
My hands are freezing and my nose is blue
I’m dying of cold but then you never can tell
‘Cause when the Russians come, they make it hotter than hell
I got a touch of pneumonia, I got a terrible cough
If I sneeze once more, it’s bound to carry me off
When the Russians come, they always take us by storm
And there’s nothing like running if you want to get warm”

Josh White grew up in the south during the 1920’s and 1930’s and his experience led him to spend his life agitating for a more fair and equal system. This led to him being caught up in the ‘Red Scare’ panic from 1947 through to the mid-1960s which saw him black-listed as a communist. His ban from the airwaves was broken in 1963 when JFK asked him to perform on national television. Josh passed away in 1967 in New York.
Classic bluesman Buster ‘Buzz’ Ezell gives up ‘Roosevelt And Hitler’ Parts 1 and 2 featuring the memorable lyric

“He’s treating us so mean with his dreadful submarines.”

Delta bluesman Eddie James ‘Son’ House, Jr., noted for his highly emotional style of singing and slide guitar playing, plays ‘American Defense’. Starting off as a preacher before turning to the blues his recording career was short, punctuated by time in jail before he was re-discovered in the 1960’s and performed at folk festivals and toured during the American folk music revival. He recorded several more albums before passing in 1988. Next is ‘Coming In On A Wing And A Prayer’ by The Four Vagabonds, an African-American vocal quartet. The song tells of an American plane on its way home on one engine.

“What a show, what a fight
Yes, we really hit our target for tonight!
How we sing as we limp thru the air
Look below, there’s our field over there

We move from such serious subject matter to the slapstick jazz of Spike Jones And His City Slickers with ‘Der Fuehrer’s Face’ where Spike tells us to blow raspberries in Adolf’s face. Spike was a bandleader famous in the 1940’s and 50’s for satirical arrangements of popular songs of the era. The jazz-swing of
Sam Browne And The Six Swingers follows with ‘Berlin Or Bust’.

Sam Browne was an English dance band singer who became one of the most popular British dance band vocalists of the pre-war era. US band leader Paul Baron And His Orchestra serve up the rousing ‘Up & At ‘Em, Yanks’ before Lead Belly returns with the only song here I had heard before the amazing Mr. Hitler. Now Lead Belly had one hell of a life (its well worth reading our biography of him here, you’ll not believe it!). Huddie William Ledbetter spent multiple spells in jail including a sentence for murder he was released early for. Passing away in 1949 he survived long enough to see Hitler in his grave. The album ends with the Rev. James A. Gates and ‘Hitler And Hell’. A preacher and Gospel music singer born in 1884, he was the pastor of Mount Calvary Baptist Church in Atlanta from 1914 until his death. During this time he recorded over 200 tracks. Performed in the style of a dynamic old-school sermon.

So faced with the worse evil of their times these artists chose to take sides. With these songs they actively encouraged and inspired the bravest of the brave to liberate humanity from one of the most vile and dangerous phenomena – fascism. Many of the artists here also fought during the War putting their words into action. Even with Hitler’s death and the defeat of the Nazi’s the war with fascism has not ended. The war continues on every continent and among every race. If we are finally to bury this evil ideology then we must win the hearts and minds of the people and with that in mind I’ll leave you with a quote from the great Irish patriot James Connolly.

(only in researching the article to accompany Kickin’ Hilter’s Butt did I come across this amazing concert from Josh White. Do your soul a favour and take thirty minutes of your life and spend it in the company of this wonderful and remarkable human being)