Their distinct sound mixes trad Irish music with rock and punk and a twist of Balkan with superb tales of the macabre and the best songwriting I’ve heard in a long time. 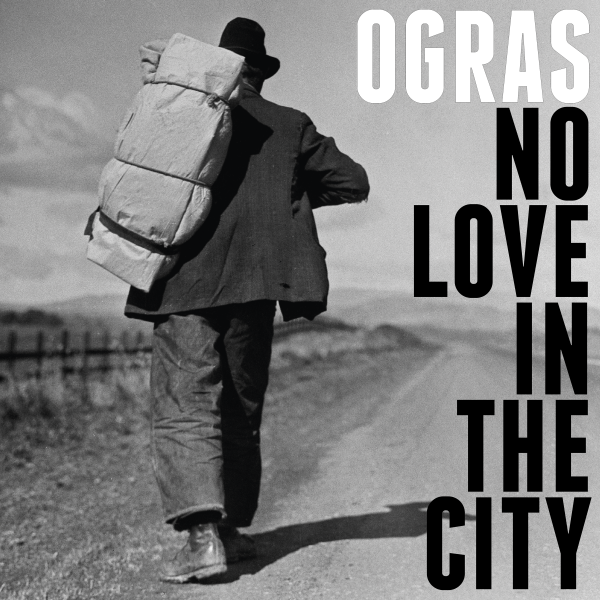 Of all the countries in the world famous for their Celtic-Punk output one of the more surprisingly famous ones is Norway. This is thanks to the legendary Greenland Whalefishers who have taken their particular brand of Pogues influenced Irish-Punk across the globe to every continent in their 25+ year history. It was bound to have an effect on the locals and back in 2009 the seeds were sown for the band that would become Ogras. The band hails from the Romsdal area of Norway, and have just one album behind them, the promising Compadre in 2018. Celtic-Punk can be different to a lot of other genres in that with a few tweaks to the set and the addition of a few covers most bands can find live work every week of the year thanks to the massive Irish pub world. This can mean that bands tend to concentrate less on recording than maybe straight up punk bands do who play live a lot less. Even so two albums in eleven years is pretty slow but admittedly then again two in three is very impressive! 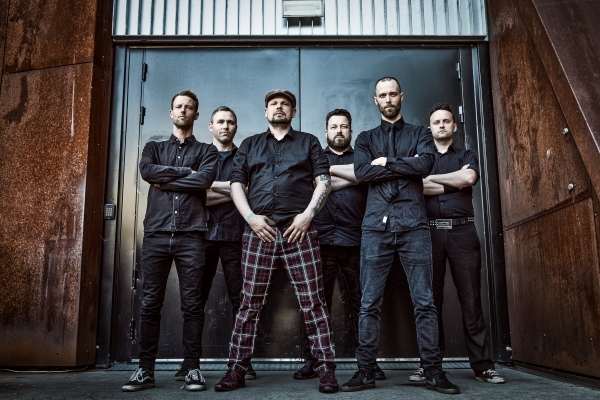 Based where they are they get to play in just about every conceivable kind of venue, especially barns! Starting off as a three piece they soon gathered more members and now their are six of them who can handle up to twelve instruments on stage whilst performing a combination of circus show, revival meeting and drunken Irish-pub night! here on their new full length album, No Love In The City the band have recorded nine original tracks, showing a range of influences from catchy, Celtic and Balkan inspired Punk-Rock, to smoldering folk-ballads and full blown party anthems. 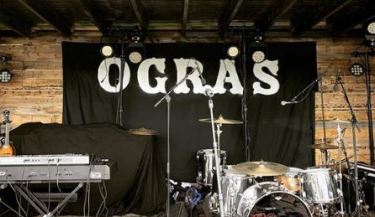 I was going to just do a straight forward review of the album but just as i was about to start the band began releasing a track-by-track description of the history behind each song so I’ll try and incorporate those here as well. The album begins with the title track ‘No Love In The City’ and while we may be looking for a Greenland Whalefishers connection Ogras have much more in common with bands like The Fighting Jamesons or The Young Dubliners and their Irish-American rock sound. This is a band that would go down a storm at Get Shamrocked! Paul’s vocals are spot on and capture that perfect space between ‘Tom Waits’ and showman crooning! No Love In The City tells of the wandered. We weren’t all born to exist in the city and the song is dedicated to travelers everywhere. The next song ‘Showmen’s Rest’ was the third song released here as a single. A fast paced Punk tribute to entertainers long gone and the deadly Hammond Circus Train Wreck of 1918. In a quiet cemetery outside Chicago called Showmen’s Rest lies a mass grave of clowns, strongmen, and acrobats who died in one of the worst circus tragedies in history when 86 circus performers were killed. I love songs like this that tell us of long forgotten history and I’m kind of surprised Chicago folklore extraordinaire Kevin Flynn hasn’t told this fascinating story before. ‘Children of Dust’ carries on in the same vein a catchy foot-tapper telling of the children of those who travel. Ogras love of the macabre and circus life continues in ‘Running Wild’. A wonderful song telling the story of twins, one of whom dies at birth while the other blamed by his mother for his death. A never ending feeling of guilt keeps him running till he eventually finds circus ringmaster Darius, a recurring character throughout the album, but will it be enough for him to stop running. A upbeat rocker with great fiddlework followed by ‘The Mighty Atom’. The Mighty Atom appeared on the cover of Ogras debut album and became a world famous strongman in the early 20th century. Born Joe Greenstein he was small and sickly as a child but he trained and trained to become one of the world’s best known strongmen, bending horseshoes with his bare hands and biting the heads off nails. The song is heavily influenced this time by Balkan music with a Eastern flavoured fiddle and brass.

We slow down a tad for ‘The Devils Dance’, a swirling eastern-ish electric ballad about a women who finally breaks free from her manipulative and violent lover. He continues to hunt for her determined to make her dance the devil’s dance again? Half way through the song speeds up and really comes into its own. ‘Black River Falls’ is the shortest song and possibly the fastest and yet still manages to fit in a well told story into its two and a half minutes! The song is based on the 1973 book ‘Wisconsin Death Trip’ by Michael Lesy based on a collection of late 19th century photos and clippings from gruesome times in Black River Falls (Jackson, Wisconsin) in the late 1800′ where unemployment and illness had lead to crime, depression and a high number of unpleasant incidents. Needless to say its a high octane Celtic-Punk romp that leads us nicely into ‘Torture King’ about the current craze for tattoos.

Beginning as a maudlin sad ballad Gaelic fiddle is the catalyst for the band to step it up and go a bit crazy! The album ends with the powerful ‘For Gloria’ the bands tribute to the strong women who spread joy, take care and protect their families. We raise our glasses to you, ladies! A great way to wrap things up and their is something great about hearing a trumpet pop up in the middle of a Celtic-Punk album! A punch bowl of hard hitting Irish folk mixed with electric guitars and that trumpet! 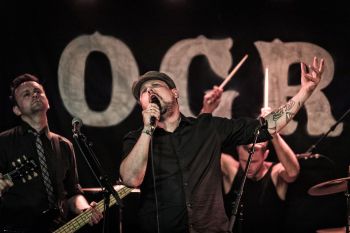 The album was released on St. Valentines day- 14th February and was recorded in the renowned Norwegian recording studio of Ocean Sound Recordings. Though originally on CD and download No Love In The City will be released on vinyl at the beginning of April. No Love In The City came as a complete surprise to me. Expecting wild Poguesy style Irish Folk what we actually get is on of the most imaginative and novel Celtic-Punk records of recent years. With it’s tales of circus strong men and disasters and bleak dark themes all wrapped in music that stays firmly in its own lane with influences from the American scene that we don’t often hear in Europe and from the East that Ogras incorporate into their own sound. A truly magnificent record and one that be can already be guaranteed to be one of the albums of the year.