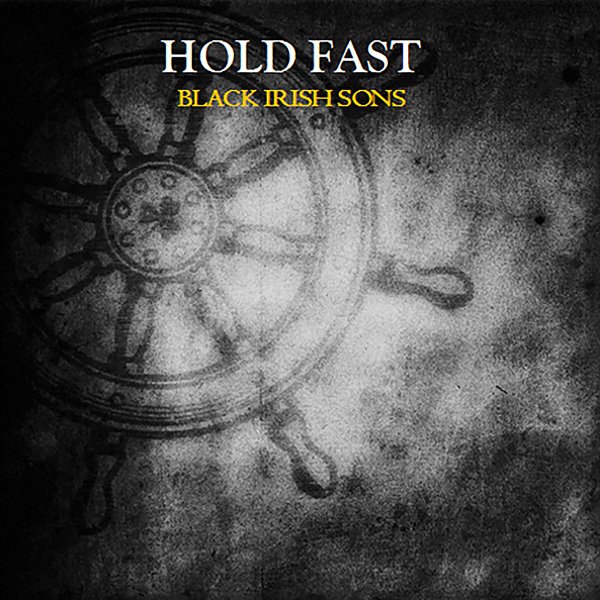 The term Black Irish is thought by many to originate back in Ireland for the offspring of Spanish sailors shipwrecked on the west coast of Ireland back in 1588. Far more likely is it became a term of abuse for poor Irish immigrants in the latter half of the nineteenth-century. The necessity for these immigrants to take the lowest and most dangerous jobs thought by the more well off classes to be the preserve of Blacks came to see them labelled Black Irish. It came about as a result of English/Protestant prejudices imported to the USA by the early colonists who saw the Irish as uncivilised and Catholicism as anti-everything for which Protestantism stood. In recent years the term has been reclaimed and is now worn as a badge of honour by working-class Irish-Americans who sometimes ‘cross the line’. 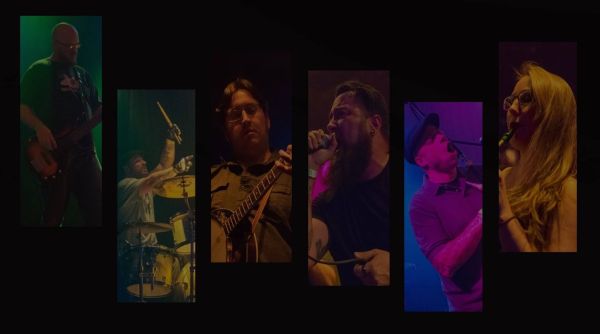 Formed only a couple of years back by Cole and Drunk Dave Hold Fast hail from Harrisburg in Pennsylvania, home of a flourishing Irish rock and punk scene with the The Kilmaine Saints at the very top of it ably supported by other local bands in the Bastard Bearded Irishmen, Punkabillys , Lucky Lad Green and The Tradesmen. In fact piper Jon also pipes for the Kilmaine Saints. The Saints have been very instrumental in helping Hold Fast get on the scene and get their name out there.

Black Irish Sons is their debut album and features ten tracks, eight original tunes and two covers, one rather overexposed and one that is much less well known. The album begins with ‘Gangway’ and the sound of bagpipes fills the air and then the sound of a pub before the band join in and when the banjo comes out the song instantly reminds you of a rather famous Dropkick Murphys song. They follow this up with ‘Drunken Irish Bastard’ and lead singer Cole has that unmistakable Irish-American twang to his vocals and a clear voice that sounds like he smokes 60 a day! The band cite trad Irish ballad bands like The Dubliners and The Wolfe Tones as influences and they do sound quite a lot like a punked up version of these bands rather than The Pogues folkier version of them.

Cole’s voice is very much to the fore throughout the album and on crowd favorite ‘The Banshee Wail’ it is given full reign to go from shouty to soft but always tuneful. An album standout the music veers from hard to gentle with Cole accompanied by a understated mandolin most of the time until the song comes to a tremendous end with the music not getting faster just louder. Any Celtic-Punk worth a sniff these days needs a few ingredients to make the correct mix and one of these is a decent sense of humour which Hold Fast certainly have and ‘My Girl Is A Singer In A Punk Rock Band’ is evidence. Played as a straight up punk song with tin-whistle its got energy and bite and gives Cole a good opportunity to test those vocal chords. We love our Celtic-Punk here but we also love a good auld ballad and Hold Fast deliver a beauty with ‘Cthulhu’. Named after the monster created by writer H. P. Lovecraft that would drive any sailor who looked upon it insane. Never read any of his books though I did try once and found it a heavy going with very very tiny print but the song conveys the terror of the being quite admirably. The album’s first cover is titled ‘Belle of Belfast’ here but is much better known as ‘I’ll Tell Me Ma’ and is rapidly heading to the #1 spot of covered classic Irish tunes. Have to say I do roll my eyes soon as I see the song listed on a new album but there’s a great reason for it being covered by so many and that’s because it’s such a fantastic song and perfect for a Celtic-Punk re-tune. Done and dusted in seventy-five seconds Hold Fast certainly don’t hang about! Next up is the rowdy title track and ‘Black Irish Sons’ takes the Black Irish theme onwards and chugging guitar and loud vocals makes for a perfect singalong.

“Because all day long whiskey and shenanigans

Every bastard that we meet turns out to be another friend

You get the feeling that the band play their instruments with one hand while the other holds a beer! We are back in ballad territory again next and it’s another Hold Fast beauty with  ‘Curse of the Drinking Class’ with Cole’s voice nicely reigned in and sounding never better. Accompanied by acoustic guitar and restrained accordion and tin-whistle it’s a great song. We get another alcohol laden track now and it’s to the seas me Bhoys as ‘Pour Me Grog’ hits the deck. A great banjo sound and gang vocals make this one of my favourites here. The album ends with one of my all-time favourite sons ‘Big Strong Man’. The writer of the song remains unknown but if not for the Wolfe Tones I fear the song would have been lost for forever. The date the song was written can be guessed from the references to the actress Mae West, the ‘Jeffries-Johnson’ boxing match of 1910, the famous Irish-American boxer Jack Dempsey, whose career began in 1914 and to the RMS Lusitania briefly the world’s largest passenger ship, the ship was sunk on 7 May 1915 by a German U-Boat off the southern coast of Ireland at the cost of almost 1,200 lives. The Hold Fast version punk up The Wolfe Tones version (check out the Tones version here) somewhat but keeps the tune intact and the hilarious lyrics keep the tune afloat. One for the crowd to go wild too and a cracking way to bring the curtain down on the album. 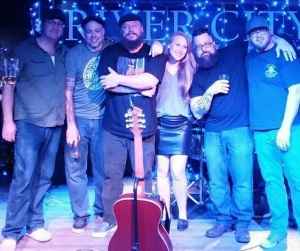 At only twenty-eight minutes long it’s over far too quickly but that’s what makes Black Irish Sons such an interesting album. Moments of fast punk rock and slow and gentle ballads mixed together to make an album that is laid out perfectly and at a ideal pace. The bands Irish roots are stamped all over things and they may look to the past of the Tones, Clancy’s and Dub’s but are not stuck there and have added their own stamp to everything they do. The more I hear of bands like Hold Fast I begin to realise the importance of Celtic-Punk to the Irish-American community.

(listen to the whole of Black Irish Sons for free before you buy by pressing play on the Bandcamp player below. Enjoy!)