Innovative and award-winning Celtic Roots band, Runa draw on the diverse musical backgrounds of its band members and offer a modern, referential and refreshing approach to traditional and more recently composed Celtic material.

Hear the world premier of Ten: The Errant Years tonight, Sunday, March 10th, on the Live Ireland (here) radio station on The Bill And Imelda Show. The show will begin at 18:00 GMT. So be sure to tune in and join the ever growing ranks of RUNAtics!

Runa have graced these pages a couple of times before and though you won’t ever find them supporting the Dropkick Murphys (mores the pity as that would be one hell of a gig!) they are, and remain so after Ten: The Errant Years, one of the favourite bands over here at London Celtic Punk HQ. With four studio albums behind them Runa celebrate their tenth anniversary with their first release since 2016’s imaginatively titled live album Live. Over the years their prominence has risen and risen to the point now where the guests on Ten read like a who’s who of the Folk and Country scene in north America. With several Grammy award winning musicians on board for this album, including legendary Irish singer, Moya Brennan; nine-time All-Ireland Irish fiddle champion, Eileen Ivers; Nashville session musican, Jeff Taylor; and Nashville singer-songwriter and Harmonica player, Buddy Greene, and many more, then Ten already sets the bar high before you have even listened to it.

Traditional Irish folk music has never stood still. Ever. Change may have been slow at times but it always came and always despite those who would never accept any deviation to what had become before. As Ireland’s people spread reluctantly across the world they took with them their music and so Irish music evolved. From the 1940’s onward it was seen as the music of the farming communities and the working-class and held in low esteem until The Clancy Brothers shot to fame in the 1950’s and introduced it to an audience well outside of the Irish community and suddenly it become very popular. The Dubliners moved it further on with their Guinness soaked ballads of the 60’s with the Irish showbands and Celtic-Rock of the 70’s taking us up to The Pogues and their beer soaked ballads of the 80’s and the more modern development of Celtic-Punk. Outside the island of Ireland Irish music has soaked up the influences of wherever Irish people have washed up and fully embraced it. In the States that means pushing the boundaries of Irish folk into Country and Americana and Bluegrass. Runa do all this but in a much more subtle way than any Celtic-Punk would and it has been very successful too with them being awarded several honours including Top Group and Top Traditional Group in the Irish Music Awards and three Independent Music Awards including Best Live Album, Best World/Traditional Song, and Best Bluegrass Song. They even wound as #1 in the 2014 London Celtic Punks Best Trad/Folk Album of the year for Current Affairs.

Runa from left to right: Canadian Cheryl Prashker on percussion, Jake James of New York on the fiddle, vocalist and step-dancer, Shannon Lambert-Ryan of Philadelphia, Caleb Edwards of Nashville on mandolin and Dublin-born Fionán de Barra on guitar, bass, vocal and bodhran.

Together they have set the Irish folk music scene alight and will continue to I am sure with the release of Ten. The songs here represent the progression of Runa from a traditional Irish folk band to what they call themselves ‘Celtic Roots’. Music that not only takes in the other Celtic nations but also their adopted home on the other side of the Atlantic. Ten begins with Glasgow-Irishman Paul McKenna’s track ‘Again For Greenland’. It’s the usual story of an Irishman going off somewhere leaving his beloved back home on the shore.

“We leave our sweethearts and our wives,
All weeping on the pier;
Cheer up my dears, we’ll soon return,
‘Tis only half a year.”

The rumble of the bass at the beginning gives way to Caleb’s amazing mandolin and Shannon’s ever amazing vocals which lead everything along and adds so much to the music. It’s for albums like this and bands like Runa that the dictionary folk invented the word ‘catchy’ so to spare me repeating it for every song just assume that every song here is and bloody well is too!‘ 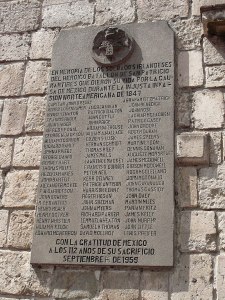 Commemorative plaque in Mexico City unveiled in 1959: “In memory of the Irish soldiers of the heroic St. Patrick’s Battalion, martyrs who gave their lives to the Mexican cause in the United States’ unjust invasion of 1847”

‘John Riley’ tells of the Irish adventurer who left Galway during the famine years and winded up enrolled in the American army where he ends up fighting in the Mexican–American War of 1846–1848. Treated terribly by the US army and suffering from the common anti-Irish and anti-Catholic discrimination of the time John led a number of fellow Irish Catholics who decided to defect to the Mexicans, where they formed the Saint Patrick’s Battalion in the Mexican Army, fighting bravely in several battles though eventually being all but wiped out in the The Battle of Churubusco on the 20th August, 1847. Their memory is still celebrated widely in Mexico today. The song speeds along at a decent pace and Buddy Greene’s harmonica certainly livens it up along with the beat of Cheryl’s percussion. A sad story but one of many times through history the Irish proved themselves in battle. Though Shannon’s voice is intrinsic to Runa’s sound the band naturally excel with pure Irish trad and with the superb ‘Kelly Man Reels’ Jake plays amazing fiddle to the opening two reels written by Fionán before ending the track with the Scots reel ‘A Trip To Strathbogie’. ‘The Green Fields Of Canada’ sees Shannon tell another tale of Irish emigration though unusually as Andy Irvine, who recorded the song with Planxty, says

“Unlike most emigration songs, the émigré in this one appears to believe he has done the right thing”.

“If ever friendless Irishmen chances my way:
With the best in the house I will greet him and welcome”

Next up is the modern day Scottish folk song ‘Thaney’ written by Karine Polwart of Malinky. Upbeat and again Cheryl’s innovative use of percussion adds so much to the sound of the song. ‘Great Lakes Of Pontchartrain’ is an American ballad telling of a man who falls in love but the love is unrequited. Thought to have originated in the southern United States in the 19th century it is perhaps most famous for its recording by the legendary Planxty in 1974. ‘Firewood Set’ is another grand set of reels with the opening track written by fiddle player Jake and June Apple and finishing with the trad ‘Chinquapin Hunting’ and the switch from fiddle to mandolin is absolutely seamless. ‘The Banks Of Newfoundland/ Jerusalems Bridge/ Crowleys’ begins with the first of the three tracks with another sad tale of emigration. Written in 1820 the subject matter belies the tune in these songs and with two fantastic reels added onto the end it’s pure upfiting. More than half way through Runa now play a glorious cover of the David Francey penned track ‘Saints & Sinners’ which could almost have written for them. They follow this with the long forgotten Hoagy Carmichael and Jack Brooks penned ‘Ole Buttermilk Sky’. Written in 1946 for the Western movie ‘Canyon Passage’ it’s pure hokum and a welcome and jolly interlude. ‘Torn Screen Door’ is a beautiful song featured here in a stunning video below. Sung unaccompanied by music this style is known across the world as acapello but in Ireland it is called sean nós (Gaelic for ‘in the old style’) and is considered the ultimate expression of traditional singing. Usually sang as a solo but not always, here Runa tell the all too common story of hardworking working class folk losing it all.

In true sean-nós style the words are considered to have as much importance as the melody as in ‘Torn Screen Door’. With ten years under their belts it’s only natural that people have come and gone but Runa always welcome them back for more, as on their last album Live, and the following few songs have a handful of ex-members joining in, like on ‘Runa Alumni Set’ which flips from folk to jazz to trad Irish and back again all seamlessly and is an absolute pure joy to listen to. Just three songs to go and on ‘An Buachaillín Bán’ Runa are joined by Clannad’s Moya Brennan as well as Fionán’s brothers Cormac on harp and Eamonn on flute for a beautiful and gentle version of this Gaelic language song. ‘Dance In The Graveyards’ again shows the bands versatility with a cover of the North Carolina-based roots-rock band Delta Rae’s 2012 hit and the curtain comes slowly down on Ten: The Errant Years with the trad Appalachian spiritual ‘Bright Morning Stars’. Slow and mournful and a superb way to end things.

CLICK HERE TO HEAR A PREVIEW OF THE ALBUM

Runa have an amazing way of interpreting work and with the songs here ranging from centuries old to modern times the selection is as varied as you could wish for while still having Runa stamped all the way through it like a stick of seaside rock. There are no boundaries for Runa as they continue to expand on their Celtic sound and even throw in such gems/surprises as ‘Ole Buttermilk Sky’ among the sometimes haunting and tragic melodies and themes from Ireland and Scotland giving such a refreshing take on Celtic traditional music. It is no wonder that Runa are well received everywhere they go and their reputation as one of the best and inventive folk bands of this modern era is well deserved.