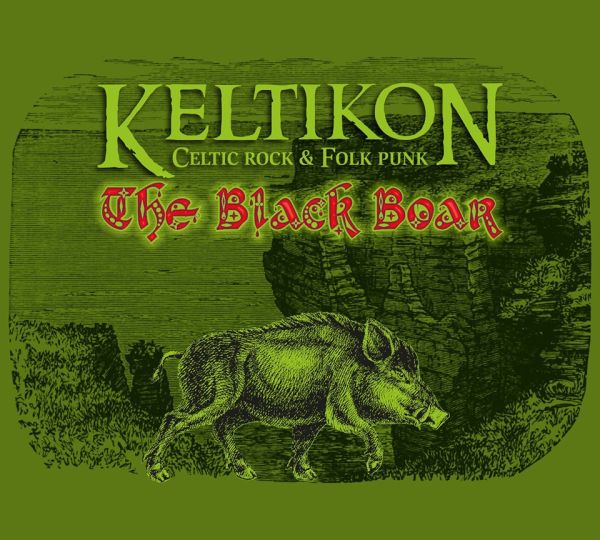 It’s been quite a while since Keltikon graced these pages properly. You have to go right back to May, 2014 to find our review of Agenbite Of Inwit. These may have been early days for the London Celtic Punks Web-Zine but we recognised the quality and later in 2014 it made the Top Twenty Albums Of The Year in a year marked out for some outstanding releases. Agenbite Of Inwit was the bands debut release and is an old-English phrase meaning in modern terms, a crisis of conscience. Formed in 2012 in the Swiss city of Pfäffikon, not far from Zurich, they are the leading band in the Celtic scene in Switzerland playing mainly their own original songs as well as traditional Irish and Scottish jigs, reels and ballads, injected with Heavy Rock, Folk, Punk and Folk-Punk. Skilled musicians with decades of experience between them, not only of Scottish and Irish traditional music, but also the added attraction of Rock, Ska, Folk and Baltic all together creating Keltikon’s unique sound.

Keltikon have since their inception toured relentlessly and did an extensive tour of Ireland in 2018 that they were set to repeat this year till the dreaded ‘clampdown’ but their appearance at the Mary from Dungloe Festival 2020 has only been delayed and they are all set to play next years re-arranged Fest. The Black Boar plays just like a live Keltikon set with everything from maudlin ballads to high energy Celtic-Punk rockers but always with a link to something ancient. 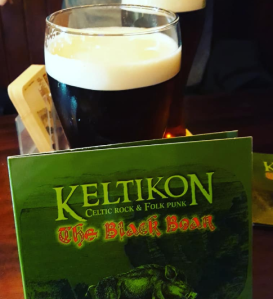 Most of the original Keltikon songs here have been written by guitarist and vocalist Olaf Ohl and to say he delves into the past with his songs is an understatement. The album begins with the title song and  ‘The Black Boar’ and its a belter to kick things off with. Here’s the story behind the song

For old Celts pigs were spirit animals, a sign of courage and power, also a symbol for war and disorder. Tryon was the King of Boars, an giant pagan creature in Irish mythology. The the counterpart could be the Welsh legend Twrch Trwyth, a prince of Wales, who had been cursed and transformed into a wild boar. He was hunted by King Arthur and and after a long hard battle the boar swam out to the sea and disappeared. This more humorous adaption suggests that the boar tricked King Arthur and only hid under the cliff, he’s still among us…

You’ll not hear this kind of lyrics on your normal run of the mill Celtic-Punk album. I’d say it belongs in the world of Horslips or Loudest Whisper but of course with a much harder edge to it.

(The first single from the album. Video concept, filmed and produced by Steve Diener)

‘Once Upon A Time (Star Coins)’ tells of the fairy tale Star Coins written in the 19th century by the Brothers Grimm famous for collecting and publishing folklore and who wrote some of the best children’s stories ever. The music is country influenced Folk-Rock reminding me of the Bible Code Sundays with the acoustic guitar and the catchy tune but with new fiddler Mélodie Pican from Orbes, in the French part of Switzerland, amazing fiddle leading the tune along. next up is ‘We Have Been (And We’re Still Here)’ and again Olaf digs deep into Celtic history but linking it to modern times. The poor have always been exploited by the greedy but these tyrants in history never last but the little people always hold their ground. The song shows the bands imagination with the Ska beat dominating but plenty else going on. Olaf’s vocals are hard to define sitting on the edge of being both a crooner and a punk. The ached sound emphasising the meaning behoind each song and show what they mean to him. A row of traditional songs now beginning with ‘Donald McGillavry’ dealing with the feats of MacGillavry of Drumglass in the Jacobite Wars in the 18th century when this song could have been written.

I’ve heard this song plenty of times and it lends itself well to be played upbeat and is a Celtic-Punk staple but Keltikon do more than enough to stamp their own sound all over it. Something they also do with the English folk song ‘The Lark In The Morning’. Though maybe not a song that you would think lends itself to Celtic-Punk here it is treated with reverence but the Keltikon stamp is firmly stamped and the song, first recorded in 1778, has a real catchy tune only just related to the original air.

Now I’m sure you’re going “not again” and the appearance of ‘I’ll Tell Me Ma’ had me eliciting the same response but Keltikon give it plenty of oomph and when played with a bit of imagination, humour and flair like how Keltikon do here taking it down a reggae route with Ursi Steck from Winterthur, who is Keltikon bassist’s, Dave’s daughter. Another song gaining popularity on the Celtic-Punk scene is ‘Bella Ciao’ an Italian protest folk song that originated among the paddy field workers in the late 19th century. It was sung to protest against harsh working conditions and later the song was adopted as an anti-fascist anthem by the Italian partisans against the Nazi German forces occupying Italy and more recently it has become much more internationally known and popular.

( Recorded live in concert at Musigburg Aarburg on 15th August 2019)

A couple of originals now penned by Olaf. ‘Chartered’ a sentimental ballad about the hardships of sailors life and ‘The Three Graves’, a tale picked out from the ‘Fenian Cycle‘ and given a cheery Country-Rock sound and again the Bible Code Sundays comes to mind. Another cover next the Scottish Folk song ‘The Raggle Taggle Gypsy’ telling of a rich lady who runs off to join the gypsies and has been recorded by all the giants of Folk and traditional music. Ursi takes on vocals again and they play the song pretty straightforward though her fine voice gives the song something extra. A couple more Olaf penned songs with the Poguesy Hells Ditch era ‘Heal My Shakra’, which does drag a bit lasting as it does nearly 9 minutes, and ‘The Diving Dutchman’ one of the earliest Keltikon songs and already featured on Agenbite Of Inwit but tampered with and re-recorded to give it a bit of extra bite and even with the fiddle like guitar work it still ranks as the most Celtic-Punk song of the album and easy to see why the band love playing it. Taking the ancient old mariner’s tale about a ghost ship and turning it into a Dutch nuclear submarine with a similar problem. Only a couple left and ‘The Rocky Road To Dublin’ is always a good choice telling the tale of a 19th-century Kildare man emigrating to England who arrives in Liverpool only to have to fight his way out. There will never be a version to top Luke Kelly and The Dubliners but Keltikon give a great blast through. The album ends with ‘The Local Boozer’ written by long time friend of London Celtic Punks and a man who does immeasurable good work for Irish music. I give you John O’Donnell Cotter, songwriter, booking agent, radio presenter and resident of county Donegal. Unsurprisingly an lovely Irish air with great humour and a fantastic way to end things putting a smile on everyone’s faces.

So almost an hour of authentic Celtic Rock and Punk. The music itself leans heavily upon the Scots Folk sound but as Keltikon began with a piper rather than a fiddle player that may be why but they certainly have made the major change in the band very smoothly and their exuberant energy shines through here. A band that has crossover appeal and could I am sure find favour with your Irish Nan, your Scots Dad or the inner Punk in everyone. Olaf’s songwriting is some of the best in Celtic-Punk and always has a real story to tell whether with humour or great sadness whether wrapped around a folky, rocky, foot-stomper or a weepy ballad. A unique band that encompasses everything good about the Celtic nations and its people and stories.

Our very good friend Rob who makes the fantastic blog This Drinking Life has just published a great interview with Olaf from Keltikon. Covering life in Switzerland over the clampdown, the release and the recording of The Black Boar (each song was done in one take. Impressive) and a hell of a lot more. Find out the origins of the bands name too!