AN ARGUMENT THAT THE IRISH FAMINE WAS GENOCIDE

Holocaust Not A Famine, Ireland September 28, 2018 Comments: 9
With the release of Black 47, a movie about the ‘Great Potato Famine’ of Ireland in the 19th century out in the next week, we take a timely but controversial look at how the famine wasn’t a famine at all and the British government stood idly by and let millions of Irish die in what is now being called genocide.
A blight upon the potatoes of Ireland forever changed the histories of Ireland, England, and the United States of America. The blight that we now know was a water mold (and not a fungus as originally believed), Phytophthora infestans, attacked the cash crop of the Irish Catholic peasant farmer. This was the crop with which the Irish paid their rent to the English and Protestant landlords.

Starving Irish peasants tried to eat the rotten potatoes and fell ill to cholera and typhus and whole villages were struck down. Many landlords evicted the starving tenants who could be found dying on sides of roads with mouths green from eating grass to fill their bellies. Other families were sent to workhouses where the overcrowding and poor conditions led to more starvation, sickness, and ultimately death. Going to a workhouse was akin to marching to one’s own death. Some more sympathetic landlords paid the passage for their tenants to emigrate to America, Canada, and Australia. Ship owners took advantage of the situation and wedged hundreds of diseased and desperate Irish into ships that were hardly sea-worthy for the Trans-Atlantic trip. These ships became known as “coffin ships” as more than one-third of the passengers died on the voyage. 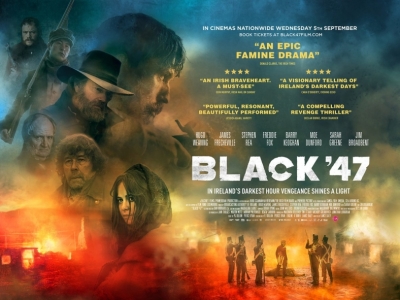 The Irish that did survive the trip to America, Canada, or Australia on the coffin ships drummed up awareness and more importantly, aid in the form of food. But for every one ship sailing into Ireland with food, more were exporting grain-based alcohol, wool and flax, and other necessities such as wheat, oats, barley, butter, eggs, beef, and pork that could have helped feed the Irish people. The Irish themselves were accused of bringing the famine on themselves as they were viewed as a lazy, overpopulated race of people – never mind that they were not legally able to fish or hunt under British law. They starved in the midst of plenty because they were not allowed to provide for themselves and their families by any means other than agriculture.

The Famine, or An Górta Mór, the Great Hunger, took more than one million lives, between those that died of starvation and those that left Ireland for a better life in America or elsewhere in the world. Those who were left behind in Ireland experienced a desperation that led to a massive change in politics and nationalism – it was only a few years later, in 1858 that the Irish Republican Brotherhood was founded. The British government and the British and Irish Protestant landowners still required the Irish peasants and laborers to pay their rent for the land they could not work due to the blight and the hunger upon them. In a lush island surrounded by water teaming with fish and land that fattened pig and cattle alike, how could one failed crop cause a Famine? According to British law, Irish Catholics could not apply for fishing or hunting licenses. Their pigs and cattle were sent to England to feed the British and to export for trade, while the landlords kept the fine cuts for themselves. Ireland was part of the British Empire, the most powerful empire in the world at that time – yet the British government stood by and did nothing to help their subjects overcome this hardship. In our time, an enforced famine such as this would be labeled genocide yet in the 1800s it was merely an unfortunate tragedy. As defined in the United Nation’s 1948 Genocide Convention and the 1987 Genocide Convention Implementation Act, the legal definition of genocide is any of the acts committed with intent to destroy, in whole or in part, a national, ethnic, racial or religious group, including by killing its members; causing them serious bodily or mental harm; deliberately inflicting on a group conditions of life calculated to bring about its physical destruction in whole or in part; imposing measures intended to prevent births within the group; and forcibly transferring children of the group to another group. The British policy of mass starvation inflicted on Ireland from 1845 to 1850 constituted “genocide” against the Irish People as legally defined by the United Nations. A quote by John Mitchell (who published The United Irishman) states that

“The Almighty indeed sent the potato blight, but the English created the Famine”.

From the Greek word for tribe (or race), genos, and the Latin term -cide, the word genocide refers to the extermination of the peoples of a nation (or religious group) carried out by an organization, usually a government. Such is the case when discussing the British treatment of Ireland during the potato blight; treatment which was based in the history of Ireland.

William Makepiece Thackcray wrote: “…It is a frightful document against ourselves…one of the most melancholy stories in the whole world of insolence, rapine, brutal, endless slaughter and persecution on the part of the English master…There is no crime ever invented by eastern or western barbarians, no torture or Roman persecution or Spanish Inquisition, no tyranny of Nero or Alva but can be matched in the history of England in Ireland.” (Metress, 2)

A famine did not truly exist. There was no food shortage in Ireland evidenced by the fact that the British landowners continued to have a varied diet and food stuffs were exported. This was not the first failure of the potato crop in the history of Ireland. The starvation (and genocide) occurred as the British carried on their historical exploitation of the Irish people, failed to take appropriate action in the face of the failure of the potato crop, and maintained their racist attitude toward the Irish.

The Penal Laws, first passed in 1695. were strictly enforced. These laws made it illegal for Catholics (Irish) to own land, and required the transfer of property from Catholics to Protestants; to have access to an education, and eliminated Gaelic as a language while preventing the development of an educated class; to enter professions, forcing the Irish to remain as sharecropping farmers; or to practice their religion. In addition, Catholics (Irish) could not vote, hold an office, purchase land, join the army, or engage in commerce. Simply put, the British turned the Irish into nothing better than slaves, subsisting on their small rented farms. The exportation of wheat, oats, barley, and rye did nothing to help the financial status of the poor farmer. The produce was used to pay taxes and rents to the English landlords, who then sold the farm products for great profit. These profits did nothing for the economy of Ireland, but did help the English landlords to prosper. The Irish farmer was forced to remain in poverty, and reliant on one crop, potato, for his subsistence. The potato became the dominant crop for the poor of Ireland as it was able to provide the greatest amount of food for the least acreage. Farming required a large family to tend the crops and the population grew as a result of need. Poverty forced the Irish to rely upon the potato and the potato kept the Irish impoverished.

As the economic situation worsened, landlords who had the legal power to do so, evicted their Irish tenant farmers, filling the workhouses with poor, underfed, and diseased human beings who were destined to die. A caption under a picture shown in The Pictorial Times, October 10, 1846, best describes the circumstances of the great starvation, and the nature of the genocide:

“Around them is plenty; rickyards, in full contempt, stand under their snug thatch, calculating the chances of advancing prices; or, the thrashed grain safely stored awaits only the opportunity of conveyance to be taken far away to feed strangers…But a strong arm interposes to hold the maddened infuriates away. Property laws supersede those of Nature. Grain is of more value than blood. And if they attempt to take of the fatness of the land that belongs to their lords, death by musketry, is a cheap government measure to provide for the wants of a starving and incensed people.”(Food Riots, 2)

It is time for the world to stop referring to this disastrous period in Irish history as the Great Famine, and to fully realize, and to acknowledge, the magnitude of the crime that systematically destroyed Irish nationalism, the Irish economy, the Irish culture, and the Irish people.

9 thoughts on “AN ARGUMENT THAT THE IRISH FAMINE WAS GENOCIDE”