Quality celtic folk punk from the smugglers cove of Hastings.

One of the highlights of 2015 was the emergence of a couple of bands who have gone on to become both solid fixtures not only on the celtic-punk scene but also on the wider alternative/punk scene also. I am talking of course about the mighty Mick O’Toole and, the band I am reviewing today, Matilda’s Scoundrels. It seems only five minutes since I was reviewing their last release, the split CD EP with The Barracks, in December. That went down an absolute storm among various punk media and has seen the bands profile rise considerably. Performances at this years Manchester Punk Festival and a short northern tour ending with a support slot to Blood Or Whiskey in Scotland are just the tip of the iceberg and the bands weekends have been spent traversing around England with guitars and tin whistle in hand!

Matilda’s Scoundrels formed in 2014 and the boys have been building a solid reputation on the south coast gig scene over the last couple of years and have began to bring their sound to festivals, bars, pubs and clubs across the UK with an ever increasing army of followers. Later this year they will perform at Rebellion, Boomtown and Common Ground festivals so plenty of chances for you to check them out. The boys hail from Hastings on the south coast of England. An area once famed for its pirates and smuggling links back in the 1800’s. As one native of the town commented

“No business carried on in Hastings was more popular and extensive as that of smuggling. Defrauding the revenue, so far from being considered a crime, was looked upon as a laudable pursuit, and the most successful ‘runners’ were heroes. Nearly the whole of the inhabitants, old and young and of every station in life, were, to some extent, engaged in it”

The smugglers of Hastings had an ugly reputation. They earned the nickname ‘Chop-backs’ after one of them split the spine of a Dutch sea captain! So in a town steeped in tradition the emergence of Matilda’s Scoundrels is not such a shock and their town’s history looms large in everything that they do. They recently became the first band to play on the newly rebuilt Hastings Pier after the original burned down in 2010.

So it is then that Matilda’s Scoundrels have delved deep into their towns history again here and written a song ‘Crowleys Curse’ dedicated to one of Hastings most infamous residents, Aleister Crowley aka The Great Beast. Born to a wealthy family (as so many of these type of characters usually are!) he was made notorious in the popular press for his interest in astrology, Satanism and the practice of ‘sex magick’ and other supposedly shocking occult activities. He died in Hastings on 1 December 1947 aged 72 and is, no doubt, looking up and chuckling away at this song in his honour. The curse mentioned in the song is the local legend that Crowley cursed Hastings. The curse means that anyone who has ever lived there will always live there. Famous when I was a child for the Battle Of Hastings when in 1066 King Harold II was defeated by the Norman forces of William the Conqueror in a battle that would shape the future of England for centuries to come. Sadly, recently though the town has become more famous for the social problems the residents face. High drug addition and crime rates had turned the town into a regular feature on ‘poverty porn’ TV programmes. Of course the councils answer to this is to try and gentrify and opening up a art house cinema or selling croissants instead of candy floss on the new pier are not going to help anyone. Still things are improving and a healthy community spirit is developing and as usual the best way to improve things in your community is for that community to do it themselves.

Blending traditional punk instruments with accordion, mandolin, tin whistle and gravelly vocals Matilda’s Scoundrels have again hit the heights and when I described that Split EP as their best release to date I find myself saying it again now! Quinn’s vocals and Jason’s whistle start the song before the rest of the lads join in and even if I can’t see the council adopting it as the towns anthem it ought to be.

“The great beast proved a popular addition to the lonesome town without submission as darkness fell so he woke in the old town of Hastings.

Slower than usual but unmistakeable Scoundrels. I was lucky enough to see the band play it live for the first time and it has grown on me ever since. They follow this up on side B (remember this is vinyl!) with another live favourite ‘Pissheads Anthem’. A lot faster and plenty of sweary gang vocals and “Hey!” shouts.

“Give me whiskey, give me beer, Get me drunk as fuck and just leave me here”

Crowleys Curse is being released as a two track vinyl single and in all the years we have been doing this zine we have only ever reviewed one vinyl release and already this year we are on our second release. The other being The Cundeez 7″ ‘Rebellion’. It’s a collaboration between all the following record labels TNS Records, Smegma Records, AWOL Records, Almighty Beard Records and Charlies Big Ray Gun Records so a great project and a perfect example of working together. It certainly warms the heart to see an increase in the popularity of vinyl and see more and more vinyl releases. I keep saying it, and with a Mick O’Toole album due soon, it only remains for a Matilda’s Scoundrels album and international stardom awaits! 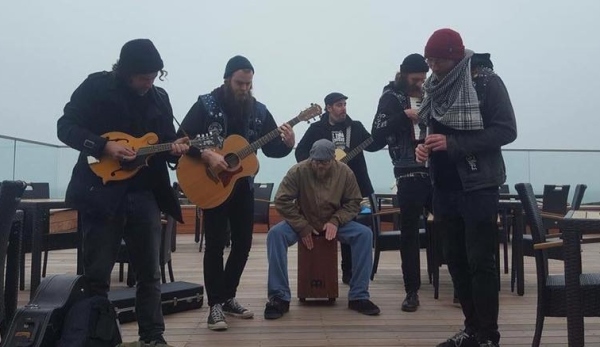